Trying this again without making it political (MODS: if you need to take it down again, I apologize).

Supporters of Tuberville’s fall opponent tweet he’s “gonna run through you like Fred Talley at an 11AM Jefferson-Pilot game.”

One of my all time favorite UA memories. Go Fred Go!!!

One of my all time favorite games. 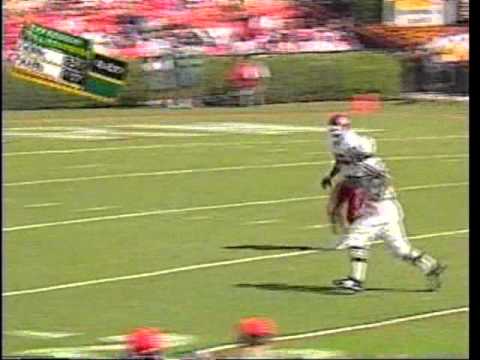 That little man was so special!

Wouldn’t we like to be able to compete with the big dogs of the SEC like that again.
We had so many athletes with speed along with a mauling O-Line and a defense that could more than hold there own.
Hope CSP can restore pride to our Razorback Football program.

I recall good-natured Aubie fans for weeks on the old, old, old board reporting sightings of Talley still running loose all over town. Good times.

I recall good-natured Aubie fans for weeks on the old, old, old board reporting sightings of Talley still running loose all over town. Good times.

Weeks? They STILL do…

Matt Jones breakaway on that last touchdown was just incredible. He was so gifted. I wish he had not had to play with a bum shoulder. The guy was Heisman material with a good right shoulder. What an athlete he was.

It impresses me that after all these years, a dig at Tubs would be of Fred Talley. I know that was a special game for Hog fans, but obviously it impressed people in Alabama, too.

Weeks? They STILL do…

I have several Auburn friends. To their credit, they will still smile at me and say something like “I think Fred Talley just scored on us again.” I do not like Auburn, but their fans are overall better than most schools.

I agree on the Auburn fans. I have many and most are very classy.

I was able to be at that game with my Dad. We were living in Montgomery then so I was able to enjoy “Ferrari Fred Talley” for a long time.

Man, we had a defense then.

Good memory - thanks for sharing.

I really thought he had a couple 80 yd runs.He was a very good RB,tough hard nosed kid.

That was the most “unexpected” top running performance in my Hog memory… a close second, Roland Sales 200 plus yards against Okie in the Orange Bowl.

I am afraid the running game will soon be a thing of the past except for an occasional keep the defense honest draw type play.

I am afraid the running game will soon be a thing of the past except for an occasional keep the defense honest draw type play.

I hope not. However, it seems these things cycle in college football. The pass has gradually become more common, but I hope we don’t see all “run & shoot” type offenses.

I blame TV. But especially younger fans want scoring and passing they think is the best way to do that. How many Fullbacks in the NFL now and I have read several articles lately about how much RBs salaries are going dowm compared to a few years ago.
But even baseball is not the same as when I was a young man. Time marches on.

Wasn’t it Talley that broke a big one late in the Miracle on Markham that brought us within 6 of LSU before Jones/Smith/Birmingham went wild in the last minute?