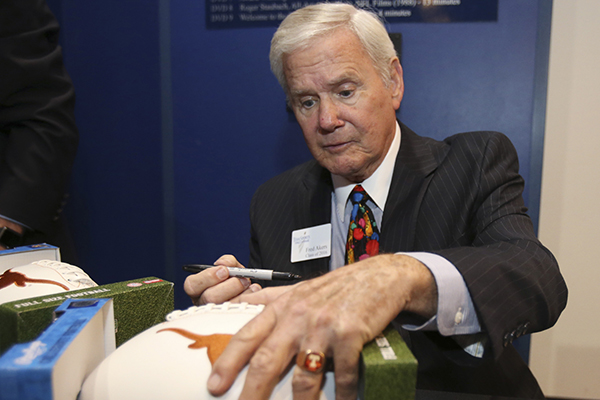 Fred Akers, a former Arkansas football player who led Texas to a pair of undefeated regular seasons as a coach, died Monday, his daughter Lesli told The Associated Press.

Another one of my dad’s teammates. People on that '59 SWC co-champion team dwindling fast.

Liked Akers but always bothered me in his later years that he turned his back on Arkansas & embraced the longhorns for the remainder of his life. Never read or heard where he ever associated himself with the Hogs.

One of my greatest memories of Arkansas football was our 1981 beating of #1 ranked ut coached by Akers 42-11 in Fayetteville.

When AD Broyles was asked by reporters about whether he would try to hire Akers from ut after Holtz departed, his response was effectively that “we have Akers coaching where we want him.”

I don’t care where he found coaching employment, he was a class act and always a Razorback to me. RIP, Fred. Bad year for ex-Razorbacks. Add Eddie Sutton and Tarvaris Jackson to the list. Any more I forgot?

No one said that Akers wasn’t a class act nor condemned him for coaching ut.

Just disappointing that Akers relinquished his association with the Razorbacks & rarely acknowledged his Arkansas ties, only his ties to ut. Most other former Razorback players & coaches who moved on still publicly acknowledged & spoke favorably about Arkansas.

FYI Matt…Royal started at Texas in 1957, a year before Broyles came to Arkansas. Broyles did get his first Head Coaching job in 1957, at Mizzou.

My dad took me to my first Razorback game that day. I remember well Freddie Akers kicking that field goal. I was 15 years old at the time. The road from Alpena to Huntsville was unpaved, so any trip to get to a game was a rough ride.

I remember an ABC Sat football broadcast with Frank & Keith Jackson. ABC showed the AP top 10 on the screen. Apparently during a commercial break Frank told Keith that the coach of each of the top 3 teams (Miami, OU, & TX) were coached by former Broyles players (Jimmy Johnson, Barry Switzer, & Fred Akers). It so impressed Jackson that he came back on & made a big deal of it. Fact is, it was an impressive piece of information.

Anyway, I am sorry to hear of his passing.

Sorry to hear. He was a class act great coach.