As the teams met at midfield after the game, I noticed Franks trying to talk to Costello … who seemed to have absolutely no interest in listening … and just kept trying to walk away.

They ended up shaking hands, but would love to know what Feleipe had to say.

Anyone else see that exchange transpire?

I did. I was trying to figure it out too. My guess is Costello just took whatever franks said the wrong way. Seriously doubt Franks was being rude.

Seriously doubt Franks was being rude.

Was thinking the same, which is why it seemed odd.

Really hard to read anything specific into that, especially when you’re not in a position to hear what they are saying as well.

Many players are in “game mode” right before kickoff, and they have no bandwidth for “fraternization” with the other team. Not that they are being jerks, or that they don’t like the other players…it’s just a mental “prepare to battle” mode that isn’t’ conducive for being very social.

I saw them after the game. Costello seemed to try and walk away but Franks persisted and they shook hands.

I’ll give Costello the benefit of the doubt since he was coming off a career night at LSU and was beaten fairly bad. Reality set in. The SEC is another animal.

Edit: Just watched a replay of that conversation. My lip reading is not great but it sure looks like Costello is saying bull___ repeatedly to Franks.

Franks probably delivered the standard “great game” and the Costello replied in the Sam Ehlinger vein. BS would describe the humpers play as to what was expected. Now is ESPN gets their Aubbie projection right then there will be on AR vs Kansas bowl game. How to stop last year’s hammer down should be will known to Barry who probably bought himself a new HC gig last night.

Odom’s defense did a great job last night and I love that we have him, but this time last week there were some anointing the Pirate as the Coach of the year. It is humorous how one game can make or kill a career in some eyes. I hope our team and defense does so well that we have this worry.

Go back and watch the video again - you can read Costello’s lips saying “that’s fu_king bullis_it”. He’s evidently a punk and now it’s even sweeter that we kicked their ass 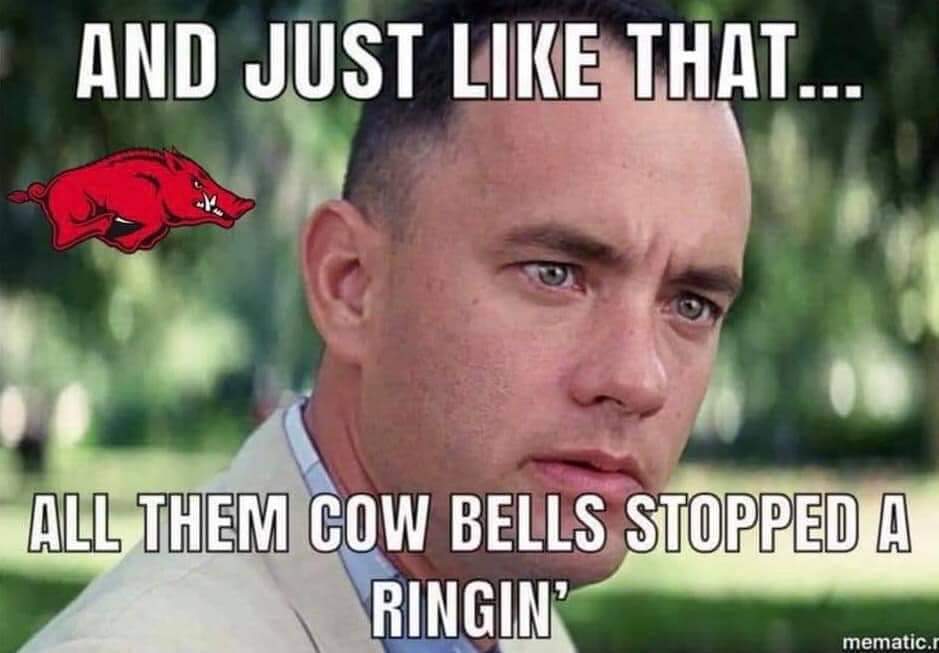 That’s great, really good to be able to laugh on Sunday after a Hogs win.

Maybe Franks was telling him his passer rating just took a dip. That’s what I pointed out in my story. Three INTs gets you beat.

Ummmm, Wiz, it WAS after the game.

It was after the game the OP was talking about. I noticed it, too. I have no idea what Franks said, but I bet it was some sort of pleasantry. Costello appeared to want nothing to do with him. I thought it was strange. Don’t want to draw too many conclusions, but since other people noticed the same thing, I’m more confident it wasn’t my imagination.

Maybe Franks was telling him his passer rating just took a dip. That’s what I pointed out in my story. Three INTs gets you beat

I hope he wasn’t saying something like that. I hope our players are more gracious than that after a win.

I was joking. No, I don’t think Feleipe is like that at all.

Ummmm, Wiz, it WAS after the game.

After re-reading your post, you did indeed say it was after the game. Don’t know how I read it otherwise, but I did. My mistake.

I remember people wanting to give Robb Smith millions and a life long contract.

Hopefully, this works out better.

I, too, saw the exchange. Let’s just say that I was impressed that Franks kept after him until he got a handshake out of him.

Perhaps Felipe just inquired as to what that foul odor was lingering in the air over Scott tissue field at Davis Wade stadium and Costello empatically answered him. After all, this did happen in Stankvomit Mississippi.