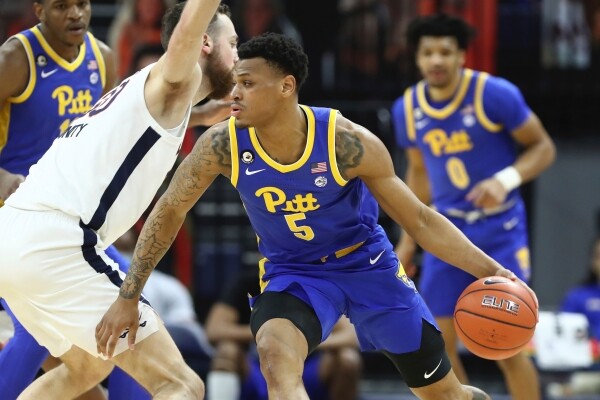 There’s our #5 jersey for next year. I like this one. 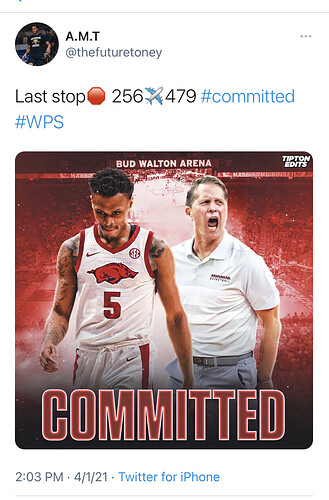 A Tate/Moody big guard replacement. I like the assist numbers. Will be interested to see how he does on defense. Will probably help to have more talent around him than what he had at Pittsburg.

Hopefully Muss can coach him up like he did Justin Smith. Justin’s offensive numbers at IU weren’t great but he was a lot better here.

Never mind, I was looking at his freshman and soph numbers; he was a lot more productive this season.

This guy is really good…

Signed and committed, hopefully means no worries on muss.

Excited. I’m assuming he has two years to play? wps

Seasoned talent and accustomed to high level, pressure packed competition. WOW! What a start in this year’s transfer madness. Coming back to SEC country. Happy to welcome you to our Razorback family.

I really like Toney’s potential(s) and Muss coaching him up where he lacks. WPS!

Toney was obviously who I was expecting to be fairly soon.

I’m assuming he has two years to play?

Yup, two years to play. Assuming the NCAA passes the one-time transfer rule this month as expected, he’ll be good to go. Had a double double against Duke in January.

His cousin is John Petty of Bama. Glad he didn’t follow cuz to T-town. 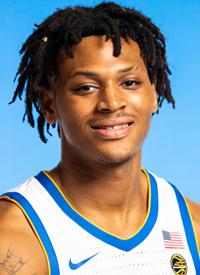 Any relation to Andrew Toney?

Man, I loved the Sixers of the early 80’s: Mo Cheeks, Toney, Dr. J, Bobby Jones, Moses Malone, and then Barkley. Since I strongly disliked the Lakers and Celtics both, I was thrilled with the '83 championship.

Pitt bio mentions several different relatives but Andrew isn’t one of them. However, they’re both Alabama natives.

I live in Pittsburgh, and Toney is a great pickup. Muss will make him a much better player for the Hogs. He is a good solid rebounder and will be a better three point shooter with Muss.

I loved the Sixers of the early 80’s: Mo Cheeks, Toney, Dr. J, Bobby Jones, Moses Malone, and then Barkley.

I too was a Sixer Fan, and remember all those players but it was Dr. J that got me. Just to think the NBA had to co-opt the old ABA just to get Dr. J because he was blowing up that league. He was and is still my favorite player all time. He walked on air before Air Jordan was around. I can admit Jordan was/is the GOAT, but I still like The Doctor the best!!

Interesting that he’s a left hander. So we will likely have 3 lefties on the floor together for extended minutes next year.

Hey PG…what happened at Pitt with these guys transferring out? Seemed like when they decided to leave Capel pretty much was like don’t let the door hit you on the way out.

Seemed like when they decided to leave Capel pretty much was like don’t let the door hit you on the way out.

Would be interesting to learn what happened at Pitt. A talented roster that included Toney, Simpson and Justin Champegnie, who led ACC in scoring for most of the season before finishing second. They had a good start, but ended up 10-12. And then the mass exodus. If true that Capel wanted them to leave, there must be overall team chemistry problem. It seems that way since Calel is still there.

I am hoping Toney is not one of the guys that Capel wanted to leave. I recall Toney was the first one that decided to transfer.