FBS would be reduced to 120 teams. Unfortunately the Pink Puppies made his cut (more on that later). And North Dakota State would be promoted from FCS because they’re too darn good for that league,

Take the 120 teams and form them into 10 12-team conferences aligned geographically to reduce travel costs. All of them would have new names or memberships. Also more on that later,

There would be no independents. Notre Dame and BYU suck it up and join a league, No conference championship games

Then the playoffs: 10 conference winners and two wild-cards. Four teams would get a bye, the other eight play to get down to 8 for the quarterfinals, Wild-card and quarterfinal rounds would be played at home stadiums. Semifinals and finals under current CFP format.

Bowls would remain for the non-playoff teams but there would be a lot fewer of them,

It would work fine for basketball and other sports, especially wih reduced travel costs. Many of the FCS teams wouldn’t have to change leagues. Of course some FBS teams would be knocked down to FCS.

What does that mean to us? We’d be put in a league with Alabama, Auburn, La-Lafayette, LaTech, LSU, Memphis, OM, Moo U, Southern Miss, Tulane – and ASWho. That league would be called the Sun Belt. There would no longer be an SEC. And our longest conference road trip would be to Auburn,

The Aggies would go back into the Southwest Conference with EOE-A and the other Texass schools of the old SWC, plus North Texas, Mobilehoma, Okie Lite and Tulsa.

The SEC East schools would be in the Mid-American (UK, Tennessee and Vandy), Mid-Atlantic (SoCar), Great Midwest (Misery) and Deep South (Florida, Georgia).

The Pac-12? The West Coast schools plus Hawaii, Fresno State, San Diego State and Nevada, The four inland schools would be in the Rocky Mountain Conference.

Of course this is something he had time to dream up with nothing actually going on, But it’s perfectly plausible to suspect that college sports after COVID-19 will not look anything like what we had until mid-March, 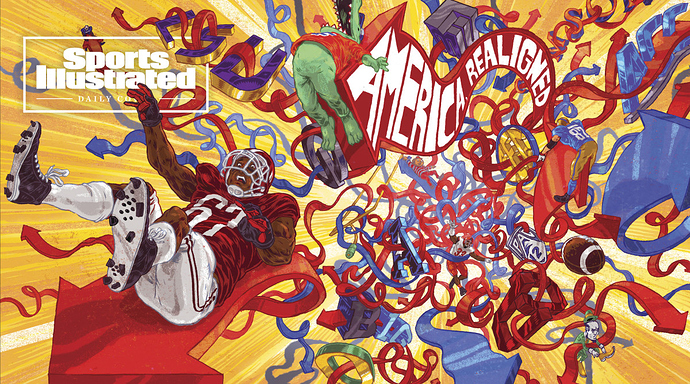 Realigning America: A Radical Reimagining of the NCAA Landscape

As COVID-19 threatens the college football season, what if we blew up the system entirely? Welcome to the Forde Bowl Subdivision.

Since there may be no real sports around, fiction is okay.

Forde needs to put down the crack pipe.

How about cutting back much further and making it simple, still getting to 12 teams for the championship.

For football only - all other sports stay exactly like they currently are:

edit: oops, Notre Dame isn’t a member of the ACC in football. Doesn’t change anything, just means they would join the B-12, with BYU, rather than transfer from ACC.

BYU and Notre Dame (and West Virginia) in the same conference? That makes bad geography worse.

The point of the geographic shifting is to save travel money. If you cut out long road trips in tennis and soccer and volleyball, not to mention 150-person travel parties in football, you might not have to cut sports. Notre Dame to Miami in the ACC. Misery to Florida in the SEC (and they’re in the same division!). West Virginia to TTech in the Big 12. Then Morgantown to Provo makes it even worse.

The point of the geographic shifting is to save travel money.

I guess you missed my statement that this is for football only. Nothing changes for the other college sports or the current conferences. The Power 5 conference teams, by and large, are not worried about travel expenses. This includes only 66 schools, not 120. The only reason I added Notre Dame and BYU was to even out conferences. ACC, in football now has 15 teams with Notre Dame.

I guess you missed my statement that this is for football only.

No I didn’t miss it. I ignored it because we’re not just talking about football here,

I ignored it because we’re not just talking about football here,

well, we were after I posted. You were the one that posted about the 12 team play-off in football. I just showed a much easier way to get there without adding 54 teams that would never have a shot at making the play-offs.

Pat’s wish isn’t going to happen. Rather, I think the P5 will split away and we will have 4 conferences of 16 each. Then, those will play each other. TV will dictate it.

Do you think people would rather watch Alabama vs. USC or Alabama vs. Louisiana-Lafayette?

Too much dead weight. Cut it down to 6x12 with the 6 champs and two wild cards. Have relegation every year or two to give everyone a chance to move up. That would require schools being in separate conferences for football than for the other sports, but that might work out better since football is kind of a separate animal anyway.

It sounds like a great idea to give the “have nots” a whole lot & take a whole lot from the “haves.” It’s true we’d save money on travel, but think how much teams now in the SEC would lose.

As for what the college sports world looks like after covid, I don’t think there’s any way at all to speculate on that. We don’t know how long it’s going to last If there’s a vaccine by this time next year, the only losses will be from whatever revenues are lost this year. That might affect a lot of decisions on scheduling the minor sports (i.e. we might start scheduling UCA, ASU & UAPB, for instance. Oh wait…) However, I don’t see the P5 schools giving up their revenue sources. There might be more regional interconference games, but travel costs are minimal now, compared to the payouts to rent-a-win teams.

Why not redistribute the wealth?

Why not distribute the wealth?

Just kidding, neastarkie. I’m with you on that issue.

It will be nice to get back to live sports (whenever that happens safely) so we don’t have to read stuff like this from Forde.

Silly. He’s hurting for something to write about.

One more detail of the Forde plan I missed the first time: Everyone would play only one NC opponent, locked in for the first four seasons. Ours would be Texas.

He admits this could never happen because ESPN doesn’t want to pay the same for a Pink Puppy game as for an Alabama game, to cite two members of our “conference”. But hey it gives us something to criticize

At least Forde admits it’ll never happen. He asks readers to submit a better plan. I have one. Keep the conferences as they are. Have the P5 separate themselves from the G5. Reduce regular season games from 12 to 11 or even 10. Have 10-12 bowl games in current bowl cities. After the bowls are played, select 2 teams who won their bowl game & who by consensus are 1 & 2 (let the pollsters vote) & let them play a championship game in a neutral spot.

This is a reply to NEA, for some reason it doesn’t appear to be showing up that way)

I know we disagree on this (we agree on most things!) but I like a play off. There is nothing more exciting than the NCAAT IMO. I loved the playoffs in high school (football and basketball).

What I would change is I would go with either a 12 or 16 team playoff (I know you are totally opposed to that). I would go with the conference champs (yes, even the Sunbelt) getting automatically in the playoffs, and either 2 (if 12 teams in playoff) or 6 at large teams. There is NO DOUBT that will NOT give you the top 12 or 16 teams into the playoffs. But if will get you anyone who has a legitimate argument that they are in the top 8 (especially if you go to 16 teams). It gives the small conferences something to play for (think of the small conferences in the NCAAT that always end up with a 15 or 16 seed). It makes the regular season, conference season anyway, CRITICAL, not just important. If you want in, you better win your conference (unlike basketball).

Play the first two rounds at the home of the top seeded teams. No, you wouldn’t have much time to sell tickets, but do you really think if Arkansas made it and was hosting a first or second round game we would have any trouble selling tickets? Alabama? LSU? USC? etc.

Still have bowl games for those that don’t make it (it would probably be fewer bowls). Does the Liberty Bowl game have any voice (now) in who the National Champ is? No. No different under an expanded playoff system.

Yep. Don’t like the idea at all. To me comparing the basketball or baseball NCAA tournaments to football is apples & oranges. All the regular seasons are for in basketball & baseball is to position the teams for a spot in the playoffs. The regular season means nothing outside that. College football is unique in that every game in every season matters. That has somewhat been diluted even with a 4 team playoff, but nothing like it would be with a 12-16 team playoff.

I don’t really care if the small conferences have something to play for. I don’t want the tallest midget to play in the heavy weight division.
If you’re going to have a playoff, especially one that is limited to as few as 16 teams, it should at least have the best 16 teams. Having the 4 best teams means the winner of the playoff is legitimately the #1 team or the national champion. I don’t care for the idea that a second-tier team can get hot & win a tournament & be declared the national champion. NC St did that in basketball against UH. It was a great upset, but also a great injustice to the best team.

We already have a system like the one you suggest. It’s called the NFL. I don’t want college football to become NFL-light.

I know I’m in the minority on this & we’re probably going to an expanded playoff system soon. First at 8 teams & then probably more. I don’t know if that means eliminating bowls & conf championship games or not. Neither do I know if that means making the football season 16 games or 20 games long. From a health perspective, I think they ought to shorten the season. Unfortunately, players’ health is not as big a consideration as the money the games generate.

Anyway, it’s quite possible that covid will change college football. I do not know if it will become better or worse. I’m sure some will like changes & others won’t. However, I do not want it to become more professional than it already is. We can’t have drafts in college football. At least I don’t think we can. We can probably have salary caps for the players. I do not know if teams need to be connected to schools or exist as independent entities that generate their own money. I won’t be alive to see what college football looks like in 50 years, but I bet it’ll look a lot different than it does today.

Back in my day in MLB the team with the second best overall record could find themsleves watching two other teams in the World Series. I do not recall anyone whining about that and
In fact I do not even watch the present structure of MLB.

My point is, there is nothing wrong with only conference winners playing in a playoff, throw in a few non champs and it might be better but it is not required only teams with the best records make the playoffs.