For the first time in my lifetime

I am not the least bit interested in the Olympics. It may be the 12 hour delay but I see what appears dozens of catagories that did not exist 20 years ago. It used to be track and field and a few other major things like basketball and swimming etc. but I see things I cannot imagine being interesting. 3 on 3 basketball for instance.

I remember when the man Bruce Jenner won the Decathlon and was famous world side for that.

New everything these days.

I’m with you. 3 on 3 is boring, just pick and roll, or one on one, or jacking a three. It’s what we played if we didn’t have enough for a full court game. Also have no interest whatsoever in skateboarding. I wouldn’t be surprised if corn hole became an olympic sport.

I feel the same way, but wasn’t interested enough to even start a thread on it. I haven’t even watched a second of it. Partly due to just being busy with my family and work, but I have zero interest. Kinda weird, now that i think about it-usually i really enjoy the olympics. Not even sure what that says about me or about this crazy world right now.

NBC will be sad to hear that news.

I have not been interested in decades. I think 84 was the last time I cared. Lived in Atlanta during the 96 games. Couldn’t wait for it to be over.

In the Summer games, all I’ve ever watched was track and field and basketball. My second favorite Olympics sport to watch is skiing in the winter games.

Well, I will have to admit, I did watch the US women 's beach volleyball match last night. I’m old and harmless enough that I can say that without any ramifications.

These Tokyo olympics are a little nostalgic to me. I was on a military base in Japan for the 1964 Olympics there. I couldn’t get a weeks leave for the two weeks during the Olympics, but a friend and I managed to get leave the week preceding the Olympics. We had a blast. There were lots and lots of athletes there practicing and getting the “lay of the land” during that week. Also, lots of pretty young Japanese girls hanging around. We convinced a few that we were with the US Olympic team.

I had little interest in the Olympics anyway but this sealed the deal.

I had little interest in the Olympics anyway but this sealed the deal.

I’m sorry that the First Amendment is so offensive to you. But I get it. The only acceptable speech is that which you agree with.

By the way, if you’d actually read the story, you would know that the US team is going to remain on the court for the anthem instead of going back to the locker room, 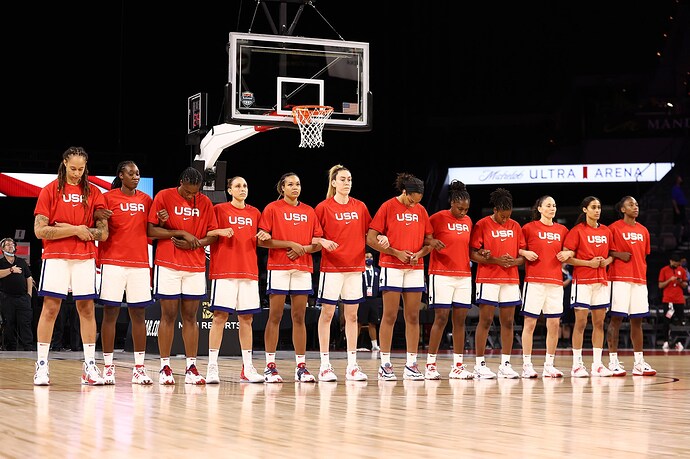 I love watching the Olympics.

I take pride in our country and those who compete for it.

No one will ever tell me how to think or root for - in sports or life.

Even though the accident robbed me of a lot of my memories and some of my smarts, I have and always will be a lion, not a sheep.

Woke up early (for me) this morning to watch Team USA play France. Disappointing loss but still a long way to go. To me, the 3-on-3 basketball is pretty entertaining and fast paced. I think there’s a 12-second shot clock, which makes the whole game feel hectic. Table tennis is something my dad and I bond over. We played a lot when I was little. These folks are super talented.

Swine…Apparently you didn’t get the point of the post. I’m a big first amendment proponent but there is a time and place for everything, example this board is wide open for almost any topic and opinion. I did read the story and could care less if they will “relax their anthem protests” at an international sporting event in which they are representing our country. It should not be a headline or a discussion in the first place. Some of us that played sports and love cheering on the Hogs and other favorite teams or individuals are interested in the athleticism and effort to see how we compare to our opponents, not how the athletes feel about a social, political or personal issue. There are other venues for that. I don’t go to a restaurant to listen to the manager or wait staff come make a speech about their feelings on a topic before I order my food and eat. If they insisted on that, I have a feeling that eatery would lose patrons and possibly go out of business. You must feel different about this subject and good for you! Looks like we’re both first amendment proponents!

I watched the 3 on 3 this morning, and the only thing I could think of, is they need to go to a local park or gym and grab the players there, they seem to be much better at the pickup game.

I love the Olympics. Last night I watched the USA Softball gals win on a walk off against Australia. And I was chanting USA, USA…. The vast majority of these athletes make no political statements and give their blood sweat and tears for our country. And those whose views may differ from mine certainly have that right. One touching moment for me was to see the video of the USA swim team (men and women) circled up outside their dorms singing America the Beautiful. They could not attended the opening ceremonies so they did this on their own to celebrate the Olympics and America.

I’m a big first amendment proponent but there is a time and place for everything,

That’s the tricky thing about the 1st Amendment … who gets to decide the “time and place”? The Supreme Court? Have they weighed in on this matter? Is it possible the future makeup of The Court could change to where a previous Decision also changes?

That’s kinda the thing about the first amendment…

Coach me here, Jeff–how does the First Amendment apply in Japan? I’m sure it does, but not real sure.

I love the olympics