last night. Heard from his wife just now. I was excited because Floyd calls me from time to time. So when my phone lit up with his name, I expected to hear his voice. It was not Floyd.

What a great man Floyd was in the community for Smith. He was a great Razorback, the last to really play as a full-time starter in football and basketball for multiple years and play big roles.

I’ll write more about Floyd and my relationship later. I do want to mention that the first time I met him was as a 17-year-old playing for the first time in the Arkansas State Golf Association stroke play championship in Hot Springs. I was paired with Floyd and Steve Creekmore III.

My father probably rigged that pairing because he was friends with Monk Wade, the ASGA president and involved in making the pairings. My dad grinned when I showed him the pairing list in the paper about four days ahead of the event.

“Don’t try to out drive Floyd,” he said. "He’s as great of an athlete as our state has ever produced. He has massive fore arms and super strong legs and will be 30 to 50 yards ahead of you or maybe more. Just enjoy seeing what a real man can do to a golf ball. It will be impressive.

“But he is as good of a person as he is an athlete. He is a great human being and one of our state treasures.”

Sorry to hear of the loss of your friend. The best man at my wedding called yesterday to tell me his wife had passed. She had been a childhood friend. None better. Tough.

Most will probably remember this but his daughter Cindy was married to Steve Little for a short time.

Most will probably remember this but his daughter Cindy was married to Steve Little for a short time.

Yep, I met Cindy and Steve a couple times. Lots of tragedy, yet special.

I had actually forgotten but Cindy also passed away in February. 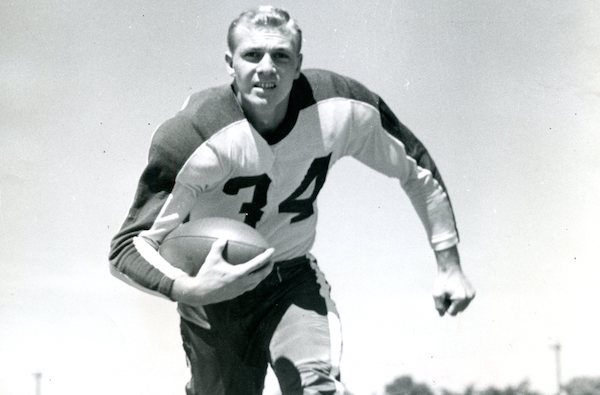 Whether playing on offense or defense for the Arkansas Razorbacks, Floyd Sagely caught the ball.

A man for all seasons. Had to bow my head after reading this and what Clay had to say. We are blessed such men as this boldly led where our footsteps have trod.

A Floyd Sagely story I discovered while helping Bob prepare the obituary yesterday.

In the season finale in 1953, Sageley’s cheekbone “caved in,” according to Orville’s account, when he collided with a goalpost that was on the goal line at Razorback Stadium. Sagely left the game momentarily, but returned to catch six passes in the game.

“The films showed the posts still shaking when I hit the ground,” Sagely said in 1985.

By the first game the next year, pads had been added to the goalposts at Razorback Stadium.

Henry Iba’s “last of the iron men” reference was earned.

If you played golf with him, you saw huge hands. I was too young to see him play football, but my dad said Floyd snagged everything near him. And, with no gloves.

When I played golf with him, I was in awe of the majestic drives and irons. His golf ball stayed in the air forever. That was old equipment. He had huge hands and forearms that just put a great amount of torque on those shafts. Steve Creekmore was a good golfer, too. He told me that the shafts Floyd used were like double stiff. Don’t know a word past stiff.