Well I don’t know what I was expecting but I was not impressed with the new Aussie punter. Curious why Bauer didn’t get a punt in the game.

Matt any information on this?

I agree. I thought Bauer punted once. Is Fletcher on scholarship? If so, I hope we didn’t waste one.

Yes they both are on scholarship.

Maybe it was more a matter of tactics. He may have been trying to place it down the side or corner to prevent a return and necessarily risks sending it out short. I assume that was by Fountain’s instruction. His brother just sent them down the middle, high enough for coverage to get there in time to prevent a return. A lot depends on where the punt originates. The Cincy Fletcher also has a lot more experience compared to Max’s one game.

It is still a competition. Pittman said he thought Fletcher was probably a little nervous Saturday.

“I never lived in Australia. I don’t know what it’s like over there to come over here and there’s a lot of people in the stands,” Pittman said. “He was probably a little nervous. Hell, I was nervous, and I’ve been around a long time.”

It occurred to me that he’s probably never punted in a game setting, certainly not with 74,751 in the stands. His dad probably played Aussie rules before that many people at the Melbourne Cricket Grounds, but that doesn’t help him any.

I noticed his brother would pause to let the coverage get farther down the field; we weren’t going for the block so he could do that. Cincy was putting some pressure on Max.

I watched Fletcher and Bauer warm up before the start of the second half. Fletcher was booming them higher than Bauer, who was kicking them high also, but Fletcher never repeated that in the game. On the 30 yard return, the ball was kicked low and got to the return man in a hurry, giving him a easy start on the return. Not sure why but nerves could have been the issue. He will need to get over that quickly or Bauer needs to be doing the punting. I hope the best for both the punters.

I think that was probably Fletcher’s first time in an American college football stadium during a game. I watch Aussie Rules Football occasionally and the stadiums there are generally smaller, and even the big stadiums are multi-sport facilities which don’t appear to be likely to hold in noise like an SEC stadium. Even if he attended a Grand Final (Aussie Rules Super Bowl) he probably never experienced anything like Saturday.

Additionally, I’m not sure he ever actually played in any games in Australia, he was signed out of a place that tries to develop kickers for US college teams. I’m guessing they put him in pads and a helmet to get him used to kicking with gear on, but the only “game” experience was probably what he got in pre-season camp.

Even if he attended a Grand Final (Aussie Rules Super Bowl) he probably never experienced anything like Saturday.

This is the Melbourne Cricket Grounds, capacity 100,000. Site of the Grand Final in most years, and served as the Olympic stadium in 1956. But the next largest AFL stadium seats 60,000 (they no longer use the Sydney Olympic Stadium which now holds 82,000). Six of the 18 AFL teams use the MCG as their home stadium 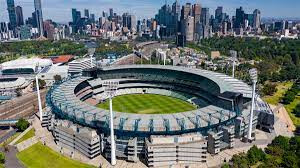