I have been asked to throw out first pitch tonight. It’s likely going to be a lob. I hope Bubba Carpenter does not check spin rate or velo. That would be funny.

You going overhand or underhand? Watch out for the rotator cuff, Be sure to warm up.

What a well deserved honor. Wish I could see it live.

I fear my rotator cuff was messed up at age 17. Reinjured again playing church league softball in Tulsa. They put me at shortstop. Mistake. I did OK, but a few of those throws did hurt.

SilverlakeHog can probably recall some softball games between the sports staff of the World and Tribune. Interesting. I could still throw OK in those games. But something happened when I started playing in a competitive church league at about age 28. My shoulder got progressively worse.

Nothing bothers me on under hand tosses. I can spin a football underhanded and get it to where I want, but not overhand. I have no trouble with golf or fly casting.

And, it may not be altogether a shoulder issue. I have herniated discs at C2, C3 and C4. I have some band stretches or pulls that are supposed to be done regularly. When I start to feel numbness in my right index finger, I get after that band and I’m fine.

I expect a 93 mph fastball right over the heart of the plate. Anything less & wouldn’t let you throw another pitch.

I will do my best. I could throw it on a line from catcher to second base at Lamar Porter Field at age 15. It’s been all downhill since.

Be sure to find a place to throw plenty of warm-ups. I find it takes at least 8 or 10 to get the distance down when I haven’t thrown a ball in a while.

I doubt I throw any warmups – unless someone tells me I should and gives me a spot to do it. If it bounces, it bounces. The worst the count can be is 1-0.

My goal is to throw one of those un-hittable pitches like Kopps. It may not be catchable, either.

If they have the ump from last night, you could hit the ballgirl and he would call it a strike.

Either way, I’ll be there cheering you on Clay.

Look forward to it!

If I do hit someone, it won’t hurt.

No I want to see you bring the heat Clay!!

Surely Matt will be on top of that…

I love it. Enjoy the moment.

If they have the ump from last night, you could hit the ballgirl and he would call it a strike

I’m having visions of Nuke LaLoosh beaning the mascot. Look out, Ribby!

My cap for tonight. Old school. 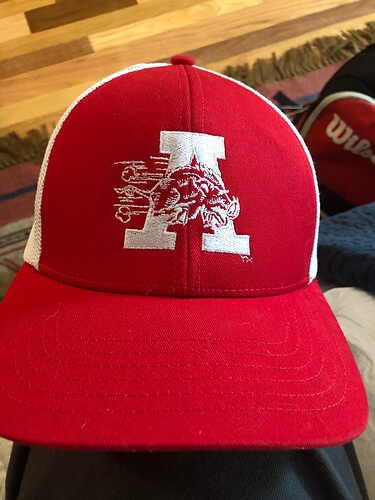 Where can we get one of those, Clay? That’s sweet!

Was made special for a birthday party. I don’t know if they are on the market. I was given the cap. 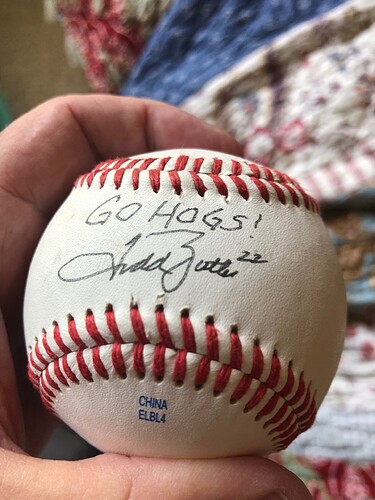 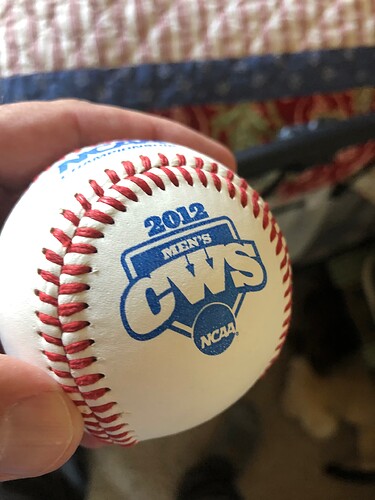 My warmup ball. It’s only baseball at Sarah’s house. Todd Butler gave it to her in Omaha. Todd is one of my closest friends and has learned to be a great fly fisher. He will visit me soon.