Just saw Fulmer on TV saying that they will only allow 25 percent full at Neyland stadium. He projected the loss of revenue to be 30 to 40 million. No doubt that is only the tip of the iceberg with businesses that benefit from football games.

I imagine a lot of folks will lose their jobs. But smaller schools will definitely take a bigger hit.

I wonder if HY will give a dollar amount on what Arkansas projects in lost revenue?

I saw him too. I think his projection is low. He also said tailgating and the vol walk are not decided. The UTK chancellor was on just before him and said students faced possible expulsion for not cooperating with contact tracing. There was a big party last week and participants are being tracked down.

I don’t think we’ll take that big a hit. Taking away 75% at Neyland is more than 75,000 people. Our stadium barely holds 75,000 at full capacity. Most of our premium seat people should be in, if they want to be, and that’s a huge chunk of our football revenue. EOE has a lot of suites too but it’s a smaller segment of their income. Last figure I saw for our total football revenue was $43 million in 2018-19 when we stunk. We’re going to lose a lot of that total but not nearly all. 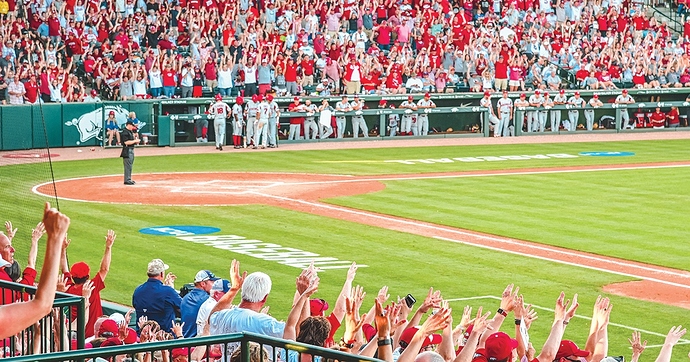 The University of Arkansas baseball team finished the 2019 season where only eight programs end up each year — the College World Series. The Hogs did something else last year... 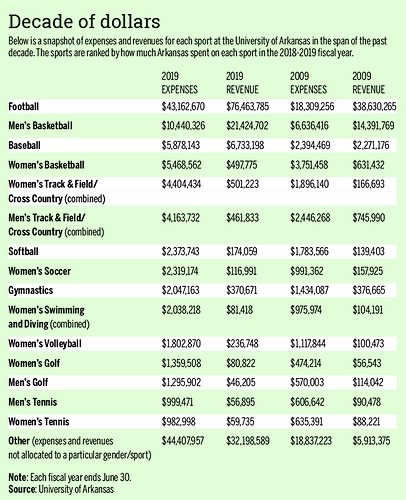 Schools are hoping that they “donate” the ticket costs they don’t use. They know many will not. Scary few weeks.

As a retiree, my income has not been affected (Social Security, a small retirement income from Phillips, and another source). I paid for my tickets up front and I’m perfectly willing to let the school keep the money that I paid for tickets. If I were still working, things would be different.

If universities are taking these major hits to their revenue generators (FB and MBB), how does that affect Title 9 in the future? Will schools challenge the rulings and push back against the legislation in order to drop unprofitable women’s sports or will they try some other way to make the numbers work?

I believe the challenges have already been rejected by the courts. Title 9 is not going anywhere.

I believe the challenges have already been rejected by the courts. Title 9 is not going anywhere

Correct. If sports are dropped, and they will be at a lot of schools, men’s sports are going to take the brunt. At the schools I’ve seen that already cut sports, there were women’s teams here and there but mostly men’s teams.