Have the Hawg players said anything about the adjustment from the NCAA ball to the FIBA ball? Heard the international ball is slightly larger and heavier, and the surface texture is different.
Might affect jump shots…so just dunk it!

Heard the international ball is slightly larger and heavier, and the surface texture is different.

Neither rulebook says anything about the texture. FIBA allows 12 seams, which matches the ball below; NCAA says eight panels with eight seams.

FIBA does allow a ball that is not all orange, and I’ve noticed the Hogs using the orange and cream ball combination in practice, like this: 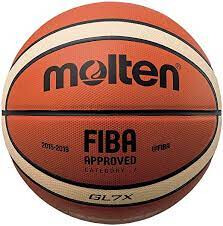 I don’t know if they’re using the Molten ball but it wouldn’t surprise me. However, there are several manufacturers producing FIBA-approved balls.

Watching them practice with the FIBA ball, it looked smaller to me, almost like a ladies ball. I guess the stripes makes its appearance to be smaller when it is actually larger than the men’s college ball.

Thanks. Good info.
I recall an NBA player saying something about the FIBA ball being different and it took a while to adjust to it during practices for the Olympics. Apparently, they adjusted and won the gold handily.

Is Festus still in timeout?

Yep. Walter is about to join him, too. I have a post currently under review by the Board’s Chief of Sensitivity Compliance.
My post mentioned Covid19 and was probably inconsistent with terminology approved by the World Health Organization.

I guess the stripes makes its appearance to be smaller when it is actually larger than the men’s college ball.

They’re basically the same size. I doubt if you put a Molten next to our normal Nike ball on a table that you could tell any difference, and in fact there might not be any difference at all, either size or weight.

Hang in there, brother, lol. And thanks for turning me on to the Babylon Bee. Their stuff is hilarious.

Check out the Onion, too.
Folks need humor. It’s healthy.

Already knew about the Onion, not the Bee. I love comedy. It’s sad to see it on life support.

I believe Nick Smith said something about it in last week’s press conference with the media. I watched it, but the audio was not the best, and I had trouble understanding some of the questions and answers. I can’t remember exactly what he said, but I believe he indicated it was very different and didn’t really like it.

Maybe Scottie will chime in when he gets a chance.

Aloha,
I believe CEM discussed the issue during his recent press conference. Stated somebody without his knowledge introduced the FIBA balls into practice. He appeared not to be happy about it. He’s not practicing to win in August…practicing to win in March.
UA…Campus of Champions

The players we talked to Wednesday said it was really small and took a little bit to get used to. Made the Nike ball they usually use feel like the size of a watermelon, one of them said.

AB played very well with a FIBA ball in Mexico. I think the rest of our team will do the same. Players play. It’s a non-issue.