Reading between the lines, I think Arkansas will schedule fewer total games against the in-state teams in future years. The Razorbacks had eight games scheduled this year — two against each team — and played seven because one of the UALR games was canceled due to weather.

All of those teams are under .500 this year, which is one of the elements hurting Arkansas’ RPI. UCA and UALR are just below .500, while Arkansas State and UAPB are well below.

Dave Van Horn did not mention in-state schools specifically, but he seemed to hint at them this week when he said this:

“Going forward, as far as scheduling, we’re still going to play certain teams, but maybe we don’t play them twice in a year.”

I know there have been those that want the instate games, but its severely hurt Arkansas’ RPI. Of the top 50 teams in the RPI, Arkansas has the worst at this point non-conference RPI. 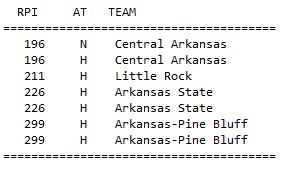 Those teams are 4 of the 6 worst RPI of teams we have played. Omaha is in there at 199 and Grambling State is 277.

For a team that year in and year out is working on getting a regional and possible National seed, that’s one heck of a handicap in a stat that historically they have not given a National seed to someone with an RPI above around 21.

This needs to be really evaluated to decide if the price is worth the cost to RPI.

It’s probably time for HY to realize that nothing good comes from playing in-state teams…in any sport. The drop off in competition is staggering…and detrimental to us.
We are a national program, and we need to schedule that way.

I think it’s fine to play each of those teams once apiece. You can’t play RPI builders every game. The key is to not schedule too many of those games. As you note, Arkansas had a lot of RPI downers this year, and probably lucked out that two more games against Omaha and UALR were rained out.

I’m reminded of an Arkansas team several years ago, I think 2011, that felt it could have been a regional host, but its RPI was too low, dragged down by playing a lot of midweek games against SWAC teams.

I’m glad to hear this. It’s what I’ve been thinking for at least a couple of weeks. It seems like D1 Baseball and others just started to realize that our RPI has not been close to our ranking, and it’s starting to hurt us in the post-season projections.

It’s been said that it’s hard to get teams to come here and play us in mid-week games, but we found teams to do it before Hunter allowed us to start playing in-state teams. I have to think we’ll still be able to find teams to play.

I remember us playing Arizona State, Texas, and Texas Tech in mid-week series. We’ve played OU a lot. We probably should have a home-and-home with Missouri State every year. One of the things about the covid year that disappointed me was we were scheduled to play a mid-week series against Michigan State in East Lansing, if I remember right, and we lost out on that.

We didn’t quite get the RPI bump playing in Round Rock this year that we had playing in Arlington last year. Since we will play in Arlington for at least the next couple of years, hopefully that will help. The competition should be good. (I’m especially looking forward to that game with Oregon State there in 2024.)

Matt, curious what is payout to visiting teams for mid week games? I figure we need to play better teams however curious what it would take for those type of teams to visit Baum.