Looking at Radar, it shows some heavy rain cells passing thru around 6:00/6:30 thru 7:00. Possible delay start time??

So tired of this stinking rain!looks like the % goes down around 7 for the night,so we will get it in

Just hope there’s no lightening associated with those storm cells. You know what kind of delay that can cause. Yes, the radar did show clearing after 7:00

Nothing has been officially announced, but I think the start time will probably be delayed. I think the weather will clear up enough by the 7 or 8 o’clock hour to play the game tonight.

That’s good. There looks like a chance of rain tomorrow morning, but then the rest of the day looks pretty good. Sunday shows the best chance of rain between 11:00 and 1:00. After that looks like clear sailing. Doesn’t look like a DH will be necessary this weekend.

The start time is officially delayed. A new start time has not been given.

Matt, your earlier assessment is pretty much spot on. It looks like 7:30/8:00 before probable start time.

It has hailed off and on at the stadium.

Any lightening in the area?

Yes. Big flash just as I read your message.

So I would assume that even though the game was slated to start at 6:30, there would still be at least a 30 minute delay from now because of lightening?

The lightning policy is a minimum 30-minute delay for every strike within 8 miles of the stadium.

And the radar show a heavy t-storm around Siloam Springs moving towards Fayetteville. The deal is the radar, or future radar keeps showing it will be clear in 30 minutes, since 5:00, lol.

Doesn’t look like that’s happening!
I use the AccuWeather app. To me it’s the most reliable. Here in Cotter, our local weather sta would be KY3 out of Springfield. I do like their past and future format, but I trust AccuWeather more. 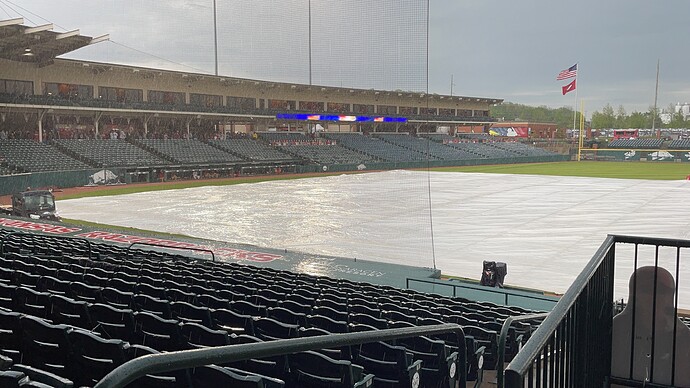 Thanks for the pic! I was wondering what it looked like at the stadium right now.

I’m watching Miss State vrs Ga, softball. First time I’ve seen State play. They are a BIG team. They are leading #24 Ga, 4/1 in the 5th. Only 5 wins in SEC play however.

It’s out of here in Har-Ber West Springdale.

They’ve started sweeping the tarp. (Picture in the game thread.)