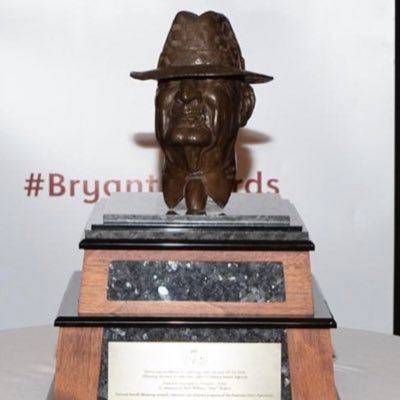 @bryantawards
The fans have spoken! Congratulations to @RazorbackFB Coach Sam Pittman👏 for being named the #BryantAwards Fan Vote Favorite, presented by @KPMG. 🏈🏆 Thousands voted and told us that Coach Pittman was as the top of the game this season.#BryantLegacy #CollegeFootball #Razorbacks https://t.co/qiOT3xs1Tc 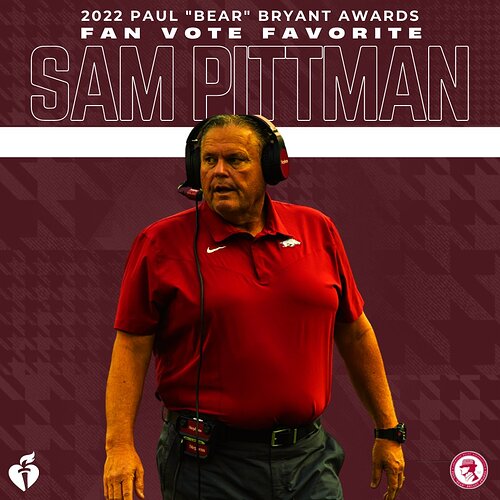 Now that’s a Big deal to any coach in America. If I had asked Sam in the into presser "how would it feel to be named the Bear Bryant Coach of the year award? Everybody would have said that was a omnibus goal. But here we are and Sam’s stock can not get much higher.

Deserved award. Always tough to judge. Several others deserve it too. But this makes me smile.

Happy for him. Seems more folks than us appreciate what he has done

I have many TN, Bama and GA friends. All of them tell me we hit pay dirt with Sam. The GA folks already loved him.

The Razorback fans needed and deserved a break, and we got it in Coach Pittman. Thank you, Sam, for the job you have done making this team a source of pride for the whole state, again.

Sam working toward that statue.

Right now JFB and McDonnell have statues. Nolan and Lance Harter deserve them. Sam and DVH hopefully will win nattys and get their own too. I’d be OK with Sutton and Norm getting them without a natty either.

I’m a little confused about just what this is.

Looks like the “real” Bear Bryant Coach of the Year award went to Luke Fickell of Cincinnati.

I’m wondering if this isn’t like some of the other major awards, where they let fans vote and the winner of that vote gets 1 of, say, 300 votes for the bigger award.

In any event, and with no disrespect to Fickell, who has done a wonderful job and is a deserving winner, this fan vote is significant, IMO, because it signals that common fans across the nation are becoming aware of Sam and the job he is doing. The College Football world is aware and watching our program now. And we haven’t been able to say that since the motorcycle fell in the ditch.

Well…at least, they haven’t paid attention to us for the right reasons until then. Feels good to have a guy leading u s out of the wilderness.

The American Heart Association (AHA) Paul "Bear" Bryant Awards are an annual awards banquet that is hosted each year in January, in Houston, Texas, by the AHA. There are two awards. One of them—the Paul "Bear" Bryant Coach of the Year Award—has been given annually since 1986 to NCAA college football's national coach of the year. The Award was named in honor of longtime Alabama coach Bear Bryant after he died of a heart attack in 1983. It is voted on by the National Sports Media Ass According to...

OK…I found this and it looks like it’s just a social media thing (facebook, twitter, etc.) to expand interest in the trophy. Doesn’t even count into the “real” vote at all.

Still, happy for the recognition, as cited in my earlier comments. And glad we had Sam!

@bryantawards
The Fan Vote is BACK! Tell us which college football coach is your top pick of the season by voting at spr.ly/6017y2DL9. Thanks to @KPMG for sponsoring Fan Vote. #BryantAwards #CollegeFootball *Fan Vote does not weigh into the selection of the Paul “Bear” Bryant Award. https://t.co/PS3YmKIc3p
system closed February 12, 2022, 2:54pm #11