I’m sad to say, in my life, I’ve done my share of mooning people. Back in my late teens and early twenties when I had more courage than sense and would do anything. That being said, I would never have thought of dropping trow in a basketball arena during a game. That guys got more stones or less brains or a combination of both than I ever had. 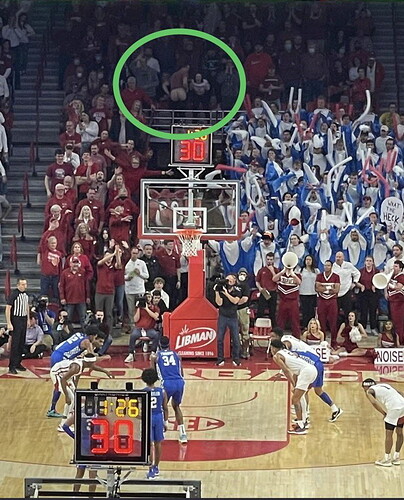 Wow just took a really good look the lady beside him is flashing her chest too!!! Can’t see anything except that she has her shirt raised!!

That is unbelievable, and funny

Fans of the Year nominees for sure!

I hope that doesn’t go viral.

It’s hit national radio at least. An ESPN talk show I was listening to on my drive back to LR from Fayetteville mentioned it. Maybe they were actually KY fans flirting with Oscar.

LOL that is so funny! That’s what alcohol will do for you LOL

We will just have to agree to disagree. I think it’s damn funny. That’s exactly the type of thing that one might expect to find in a crazy college environment. Personally, I’m not so old that I’ve forgotten what those days use to be like, so I can look at it and laugh without judgement.

Well maybe next game will have several doing the same thing. That should be a really big laugh.

So…did he miss the ft?

Oscar had two FTs with 1:26 left in the first half. He made the first, missed the second. We can’t tell from this photo which FT got mooned (that would take being able to see the scoreboard).

Either TRUE FANS contributing any way they can or like harley said Maybe they were actually KY fans flirting with Oscar.

I think that’s rather sad

Hope they are kicked out forever.

Isn’t that a criminal offense?
Indecent exposure in public.

Well I would think so. Is that pic real? Just asking…

Talk about making an ass of yourself! Guess nobody reared him right and he’s a little behind.