Fan base identifying their proper role: 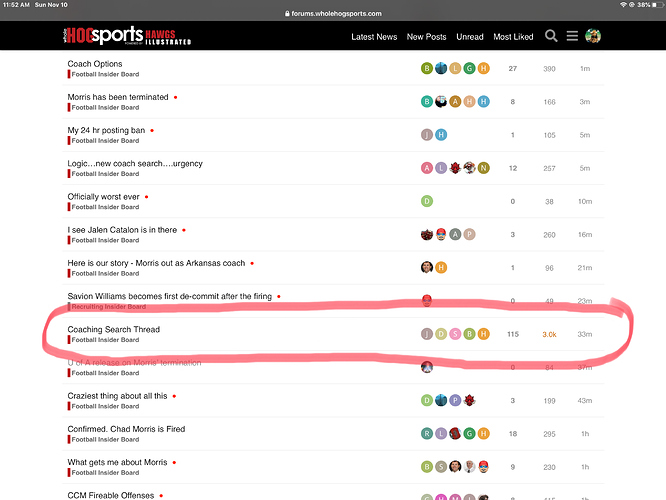 One hour into the next chapter of Razorback Football…and the speculation begins! I do applaud enthusiasm for supporting institutions that bring people together for a common cause, as long as it doesn’t transform into something divisive like the HDN debacle did. Those subversive elements from that mess are the underpinnings for where we are today. Context is the key for how much of your emotional participation should be afforded toward these situations. HY will negotiate the next coach to this university, and until he fails to deliver, we must adhere to his decision and let time validate the merits of his choice. Speculation for who you personally see as the best option yields zero benefit to your station in life, or the search process. You don’t win anything for being right, and unless you have something at stake for being wrong, there’s nothing but pride at stake for getting it wrong. This program needs to be healed by our collective support of the decisions made, and if you so strongly disagree stop buying tickets and watching the games. We’re not better individuals for winning in football, nor are we less of a person for losing. As I’ve stated in the past, this institution has a preponderance for supporting mediocrity with the football program in particular. The sheer complexity of a sport involving 85+ individual players, and the largest coaching staff of any sport requires much better accuracy of respective choices for its approach. I don’t believe any of us are qualified to take that role, and all we can offer is trust in the decisions we entrust those given that responsibility. I want us to be competitive, but I’m also acutely aware of the real issues facing the residents of the state of ours. This is in no way a condemnation of those expressing their opinions within this forum, it’s our rights as a free society! I’m simply asking ***EVERYONE *** to take a few deep breaths and think about how we can as individuals help make things better for our communities and the ones we’ve connected too and let the football undergo the next evolution. Better player development should improve the win totals, but SEC competition is a much longer development process requiring as much as 5 years to attain a respectable status. It’s just the way it works in a conference that pays its member to the extent we get paid. The most competitive landscape in sports!

That coaching search thread was created November 3, seven days before we had a vacancy.

However, I agree with your general take. Take some deep breaths, folks.

I agree Swine. It’s been a hilarious and head shaking morning reading what all our experts are saying. Only in America…

Let’s all take the stance HY is going to bring in a better situation and somewhere we’re all proud of what that represents! Until then…these players caught in this mess deserve whatever we can muster in understanding and respect. #WPS