Which will help determine who we will play in the tournament.

Basically the NCAA wants to make each region equally strong, as best they can. To do that, they utilize something called the S curve. Once the 68 teams are in the field, they seed them 1 through 68 and then apply the S curve.

Of course they have bracketing principles that can get in the way, including keeping teams from the same conference apart, depending on how many times they played during the regular season (if we play Bama next week, they would have to keep us apart until the regional final, so they couldn’t put us as the 3 seed and Bama as the 2 in the same region). They also try to avoid first round rematches of nonconference games; they wouldn’t give us a first round game against Abilene Christian, for instance, if Abilene wins the Southland AQ. And then there’s the Mormon exception; BYU won’t play on Sunday, so they have to be put in a regional where they would play on Saturday.

The bracketing procedures are a little different this year because of the pandemic and the semi-bubble tournament, so geography isn’t considered for one thing. In a normal year, they tweak the S curve to keep teams close to home so that their fans can more easily travel.

Another principle they will apply this year is that the First Four teams will all go into the “left” side of the bracket, the one including the #1 and #4 seeds. Which currently, according to Lunardi, would be Gonzaga and Illinois. So Gonzaga will play the winner of one 16 vs 16 game in the first round, and Illinois will play the other.

as in snake draft for fantasy then usual bracketology (except Wimbldon and tennis).

This is Lunardi’s seed list from this morning, which applies the S curve. Our projected regional is every team listed in the second column under Baylor. 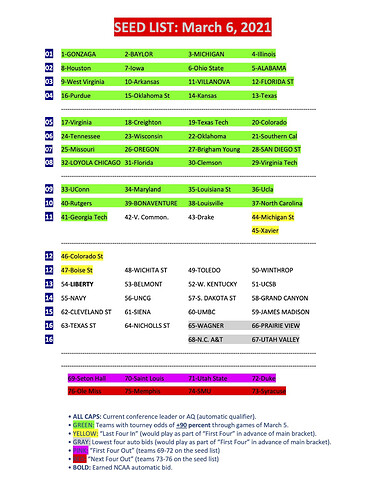 Which will help determine who we will play in the tournament.

I would 1st prefer the Illinois bracket, then Baylor, then Michigan if I’m basing choices of how best to get to the final four. Obviously all this is subject to change except for Gonzaga. They can lose and still be #1 overall. Any 2 or 3 seed (team #s5 thru 12) will make me happy, but I will be slightly less happy if we end up team #8 or #9.

All this assumes the final 4 is the main goal.

Is this the 1st year they’ve used the “S curve”? Or is this normal?

Is this the 1st year they’ve used the “S curve”? Or is this normal?

They’ve used it before, but in the past geography has sometimes trumped the S curve; they’d shift a team to a different place so a high seed could play 200 miles from home instead of 2000. And the conference considerations still outweigh the S curve. They’re not putting us as a 3 and Bama as a 2 in the same regional this year even if they’re the 8 and we’re the 9, assuming we play them next weekend. If we don’t play them in Nashville, they could conceivably pair us in the Sweet 16.