Excited to read the article on E'Marion Harris today -

to the insiders that have seen him practice - what’s the potential here, unlimited? What about Chamblee? 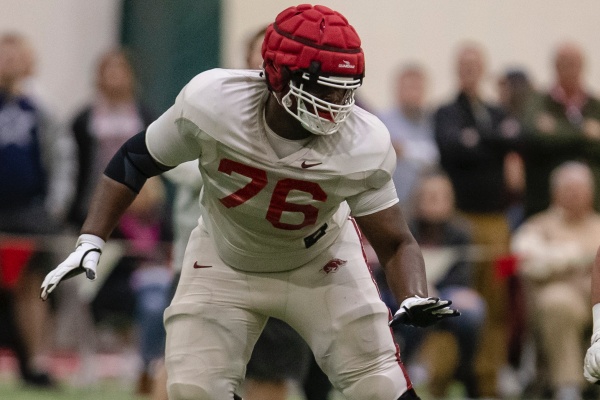 After former Joe T. Robinson standout E’Marion Harris officially inked his national letter of intent with Arkansas in December, one of the first things his high school football coach Todd Eskola disclosed to a large crowd of supporters was how...

With Chamblee, it’s about getting stronger. Twitchy for a big guy and can be really good with more strength. It was said in the spring that Harris needed to shape up his body. Can be a player who contributes in a year or two.

twitchy for a big guy sounds like Jason Peters who did get his way to TE before following his all Pro and probable HOF path at tackle. Made a little more money going inside.

One of the most impressive things about Peters was playing table tennis with himself… crazy fast for a man that size.

That HC thought everyone was a TE.

I think Richard said Harris is down to about 340. The article says 362. But either way good to know that he’s transitioning well

I saw Robinson vs maumelle last season. Very fun game, I believe RD was there also

I’ve followed emarrion since his older brother played middle school football with my oldest, and I think he’s our “next Shawn andrews”. No, I don’t expect anyone to be that good, but I think Harris will draw some comparisons soon.

Chamblee is tall and long armed, mobile for his size, but will need to really pack on some muscles before those long arms are ready for the SEC.

I forget his teammate’s name, our DL. He was very impressive, even when he danced on the sideline. Guys that big aren’t supposed to move like that. He’s really proportioned well, he looks like he’s a 6’1 220 pound safety, until he stands next to normal sized people. I’m really intrigued to see how he translates to the SEC.

Overall, I love this class.

It’s good that we no longer have to play 4-star freshmen linemen ASAP due to low numbers and low quality. If they can beat upper classmen that’s great, but only if it means quality depth.

Actually I’m sure there were many times we wished we had 4* freshmen to send in when upper classmen weren’t available, but all that were recruited were 3 or less. Some developed into fine players, but thrown into the fire as freshmen can be a challenge.

Yes I like Harris’s potential for sure I think it may take a couple of years. I really like kutas who I think can play sooner than any of our incoming OL. Chamblee has got a long ways to go, he’s got to get much stronger and much more aggressive. We are slowly but surely getting the kind of OL Sam wants here.

Youda, what about Kutas do you like? I’ve caught a few mentions of him, maybe strength, motor, length?

He’s very technically sound.he comes off the ball with very good pad level and is very aggressive,has very good feet.He has everything you look for to be a great offensive lineman

The DL from Maumelle is my old community center basketball buddy Nico Divallier(sp?) You are right about him and his feet. You could see that he was athletically special when he was in the 5th grade. Kids that big,that move the way he does, are rare. He’s got some work to do in the weight room, but his potential is off the charts.

Saw an article a year ago that Chamblee was benching 240 lbs. Going to take some hard work for him to play by his redshift sophomore year.

I think Richard said Harris is down to about 340. The article says 362. But either way good to know that he’s transitioning well

The website has 362. No idea if they will update or not. I was told by an excellent source he was 340.

to the insiders that have seen him practice - what’s the potential here, unlimited? What about Chamblee?

Pittman and Kennedy are very, very high on both.

Yeah I definitely trusted you and your source

Yeah I definitely trusted you and your source

I know you did. Wasn’t saying otherwise. Just saying where Erick got the 362.