Evidently Dreyden Norwood has committed to 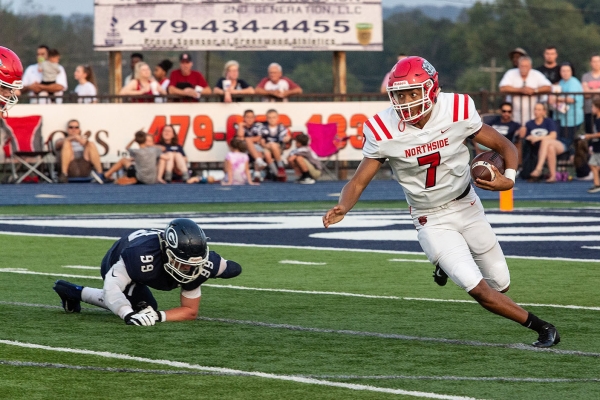 This is somewhat of a surprise.

Somewhat of a surprise? I guess.

I’m shocked… Wonder if him not being able to visit hurt us? Like he just went ahead and choose the better program?

He visited Arkansas on Feb. 1.

I thought he would be a Hog because of some very strong things I heard after his visit. Very strong.

Lets see how this plays out. Long time until Dec.

Silent commit to Arkansas that never went public, which shows you a silent commit isn’t worth much.

When was the last time a kid committed out of state only to flip back to Arkansas? I remember Ladarrius Bishop doing it, but he didn’t have an Arkansas offer when he committed to them.

I dont feel like he would flip back when he already had a chance to come here.

How about his cousin who went to Oklahoma. And there have been many Arkansas kids go out of state ( the Thomas kid from Jonesboro, etc.). We all want the Arkansas kids to go to U of A, but it doesn’t always happen.

Surprised? Our HC has never held the position before, we’re coming off two tirefires of coaching hires and we haven’t pissed a drop in half a decade.

This is what happens. Yessir

Thomas is going on a medical redshirt, enlarged heart, or something along that line, but yep, there’s usually someone who leaves the state we wanted.

We’ve had Plenty of instate kids go to Auburn, Bama, OM, MissSt, Mizz and other schools over the years. Even when we were much better than we have been lately.
Saban just likes to pluck one or two so they can ride his bench.

Surely, we lost some in those 10 years, but I can’t name any.

Surely, we lost some in those 10 years, but I can’t name any.

Kodi Burns? That may have technically been Petrino’s class, but he had just gotten to Arkansas…all of the real recruiting was done by Nutt’s staff.

Tough to lose a four-star recruit fifty miles from campus.

Jonathan Adams coming in and Joe Adams on his way out. Ryan Mallett as well.

Petrino didn’t really salvage Mallet, he was at Mich already and a Coaching change there with different philosophy and Mustain already transferred out helped bring him back.
Petrino did salvage Tyler Wilson or at least his brother did.

Tennessee got a few away from Nutt. The RB from Clarendon, Cedric Houston. The WR from Warren, Bret Smith, leading to claims that Bo Hembree at Warren was directing his players elsewhere.