ESPN panel thinks the NCAA tournament will get cancelled

They feel it will be announced tomorrow, which is totally what they should do. This idea of playing games all over the country in empty arenas was, is a bad idea.

Will watch the remaining SEC tournament games without fans before deciding. Even with empty arenas, assume most teams will want to continue playing & fans will watch the college games on tv.

However, if determined to be a safety risk of players contracting the virus from other teams, then should be cancelled.

They’re playing soccer games in Europe in empty stadiums. I’m ambivalent either way especially since it’s unlikely we’ll be in the field. I’d like to see us in the NIT, at least, but public health outweighs my entertainment.

Here’s the problem. If you go forward with the tournament, somebody is liable to get Utah Jazzed. What I mean by that is that a player tests positive, and the whole team goes into quarantine. Now what do you do-give the opposition a walk-over into the next round? Delay the start of the tournament for three or four weeks?

Here is my issue with this, they quarantined the Jazz and Thunder last night, but not anyone else (fans, officials, stadium personnel, etc…). If any of the players there last night were carrying (Gobert supposedly wasn’t there), then everyone is now in contact with the carrier and they allowed them to leave, which spreads it to anyone else who was in contact with the people that were at the arena. Also, the CDC and WHO are both saying the incubation period can be anywhere from 10 days to 30+ (they don’t know), but think how many people have seen the Jazz play in that time. Then how many fans were exposed to players on other teams that came into contact with Gobert (also officials, arena personnel, media, etc…). Then how many people were they in contact with? Young man currently playing for the Jazz is from my hometown. His family has seen him during that time and returned to my town. His brother actually visited my son at work last week (within the incubation period). My son works at a job where he is in contact with a LOT of sick people (also elderly, and people with weakened immune system, high risk for Covid19). That also means me and my wife were exposed. We went to a hotel last week, there were people from Maine, Oregon, Canada and Mexico there. Now, they could all be exposed. Think how many people they’ve been around.

I’m all for public safety, but it’s too late. Everyone, or close to everyone is probably already exposed. Canceling everything maybe already too late.

Yes, but they were already exposed. Media, arena personnel from the last few weeks. They’ve already been in contact. Saying “he wasn’t there last night, so it’s ok” is exactly what I’m getting at, they’re already exposed. The players had already finished warmups, were getting ready for tip-off when the game was canceled. What do they do when they first come out for warm-ups? Many come out and sign stuff for fans, especially children.

And it’s been that way for the entire time Gobert has had it (while it incubated).

Dude. Being in the building 200 feet from the court is not being exposed.

By the way, Gobert was not in the arena last night.

Dude, quit arguing. You normally have good info, but like most on here when it comes to this YOU ARE 100% WRONG.

Gobert WAS NOT IN THE ARENA, 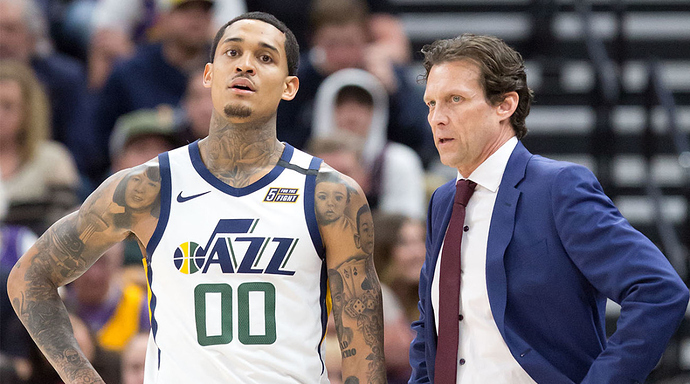 The team is also reportedly exploring chartering buses as a means to travel back to Utah.

I accept your apology for your uninformed comments. You are not medical. I am.

I said that, learn to read. Other players who have had contact with Gobert were. Some were signing autographs. Again, believe what you want, but you are 100% wrong as usual

And I accept your apology for not actually reading what I wrote and trying to spin it. You’re medical, find a new profession

The game had not started yet, I’m not sure the teams ever got onto the floor. So the exposure potential for fans from anyone on the Jazz who was carrying the virus was not very high.

I think that lots and lots of people have been in areas where they were potentially exposed. Maybe you, maybe me, maybe most folks. The higher risks appear to come from people who are actually symptomatic coughing and sneezing on those who aren’t, or leaving mucous/phlegm, etc. on surfaces in public places. So there’s where all the stuff about social distancing comes into play, and the general emphasis on using chemical cleaning solutions to clean off such surfaces.

So not all exposures are equal. Giving sick people fewer chances to infect the healthy(fewer big public gatherings, quarantining confirmed cases) and going back and sanitizing public places like arenas and schools thoroughly and probably repeatedly can do a lot of good, though we probably won’t know how much good until close to the end of the month.

I think the NIT is history.

When it comes to the Jazz, Gobert has had to have had it for a minimum 10 days (maybe as many as 30). Prior to games, players come out for warmups. During that time they sign stuff for fans, especially kids, who return to their seats. Next to other people who probably high five them or touch them (by sitting next to them) they’re exposed, even if they didn’t touch Gobert. Now last night, they canceled just before tip, it was stated by ESPN last night the players HAD taken the floor and were told to return to the dressing rooms. My guess is they probably had signed some things. Now, if that isn’t true, ESPN posted the wrong thing.

That’s my point, I understand people trying to take precautions, but a whole lot more people are already carrying than what is being reported.

Edit: Let me add on, I don’t think this is a normal virus that just appeared. I think the Chinese govt was testing biological weapons (which is illegal, and would explain why they aren’t sharing a lot of info), and they were trying to create a new virus and lost control of it. Now, to quote Swine, this (biological weapons) IS my area of expertise. So, I don’t think the WHO and CDC will know exactly what it is, or how to prevent it, until China actually says everything

I agree with you.

At some point the economics are going to kick in, they’re not going to have these events in empty arenas for long. Costs too much to power up an empty building.

FYI. Donovan Mitchell of the Jazz also has the virus, per ESPN.

And I know he signs stuff pregame. Seen him do it (both in person and on tv).

If we’re really concerned then why is commercial travel still acceptable?

From the FAA:
Every day, the FAA’s Air Traffic Organization (ATO) provides service to more than 44,000 flights and 2.7 million airline passengers across more than 29 million square miles of airspace.

I think that’s more exposure in a closer environment than the NCAA events combined. Hmm…