AKA why the Texans got woodshedded. 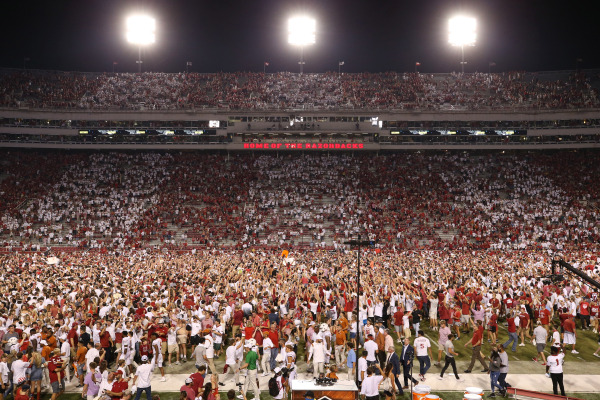 Texas’ momentum came to a screeching halt against Arkansas. Here are three reasons the Longhorns lost on Saturday night.

Yeah it was what you didn’t do well Buddy! SMH…You got your Butt fed to you one bite at a time for 4 qtrs!! I’ll say it for you,ok now proceed on with your day like a good little boy.

You know, it feels pretty good to say this and mean it:

we won because we were the better team. There is nothing in that game that would indicate to me that we couldn’t beat them 9 out of 10 times this year. Could they steal a win or maybe even one more? Sure. But, I feel pretty confident that they lost because we’re better.

We’ve had our helping of crow, and, for the most part, our fanbase has pulled its chair up to the table and dined on it without making excuses.

It’s time for us to start serving it to others.

Coulda, shoulda, woulda, but they didn’t. Arkansas won because they cared. The players were on fire. The coaches had them ready. The fans fanned the flames.

It’s amazing how in a lot of Texas fans mind, it wasn’t that Arkansas was better, but that they screwed up. Besides winning on both sides of the ball, Arkansas won the turnover battle and ST battle. That isn’t just “you not doing well” for that to happen. Texas is lucky because that last touchdown was a pity touchdown and if we didn’t take a knee, we would’ve scored again. The the score realistically could have been 47-14.

why EOE without a designation? Tenner still qualifies for EOE especially around here or does it. TX lava hate has erupted.

Context, Ray. We’re not talking about Tennessee this week. But once the Fallopians join the league I’m going to have to go with the hyphen A or K most of the time.