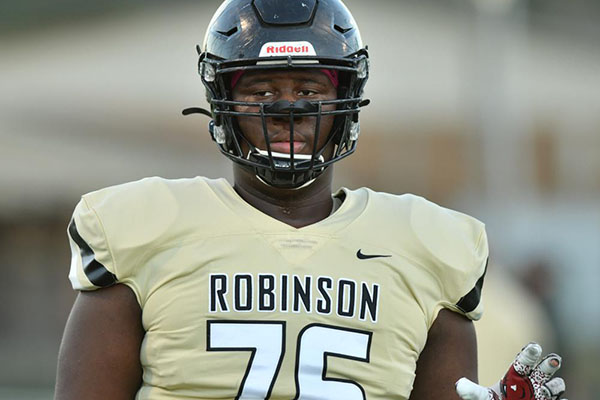 Joe. T. Robinson offensive lineman E’Marion Harris not only made his mom Tiffany happy on Mother’s Day, but a lot of college football fans in Arkansas as well.

HUGE news and HUGE pickup for the Hogs!!!

Great news. I kinda thought it would be AR if Jointer filming it.

I like the long term look that he took and mentioned about being taken care of “after college”. I’ve said that for years if you are from Arkansas and go to Arkansas then when you return home later in life, most doors are wide open for you. Now some are going to say if you go to, for example, Alabama after college, Bama is gonna look after you as well, and that’s true, but those wide open doors will be in Alabama, not your home of Arkansas. If you want to return home, the home school is the best choice.

I think that above process is more accurate in basketball than per say football. In basketball they will find a talent for the show even if its swimming in a small pond, however, as much as I hate to say it that’s not always the case in football. In football, I think you will have an easier path to the show at one of the premiere schools. Simply because more TV time and visibility and it seems historically big schools tend to win more and that gets more attention and teams take more chances with those players from those programs. I hate that Arkansas is not one of those, but I think that is a reality.

All that being said, the vast majority of college athletes will not have any future in “the show” and will find themselves joining the workforce after college. It’s so nice to be able to stay home where you might have family and support and also have most doors in the state opened for you because you are a state treasure by playing for the home team. That shows thinking in the long term.

woooo hoooooo!!! this is really big news, such a nice family, such a talented young man. I really hope to see him dominate for us, could be our best OL since Ragnow. big day. man, these coaches are getting it done.

and thanks RD, for filling the DD role of “I’m going on vacation so a commit will happen”, lol

One would think the child of a former Hog would have a better perspective of the advantages of being a Hog athlete who chooses to live life after their athletic career in Arkansas. If you believe you build a football team at the line of scrimmage(and I do) Coach Pittman seems blessed with a couple of real building blocks in Pulaski County. Great news when talented kids choose to be Hogs. WPS

I DO believe that top-notch play-makers when being recruited check out the OL and DL (depending on which side of the ball their talent is) to help them make their final decision.The Razorback HC and assistants are getting us there! WPS!

That makes sense. I think you are on their wavelength.

Not so much that “big schools” tend to win more in football… though it doesn’t hurt to be big. Only two SEC schools are in the top 15 largest undergrad campuses. (TAM and FL). Houston is no 10. Rutgers is no 12 followed by Cincinnati (13). Alabama (18) , and Georgia (38) made the top 50. Those not in the top 50 largest (which have won national championships in football) Include: Arkansas, Auburn, Clemson, LSU, Oklahoma, Nebraska, Notre Dame, and Tennessee. Obviously the winners have great “tradition” (alumni base, fans, reputation). Arkansas has had great football tradition. Just need to get our mo back. https://blog.prepscholar.com/the-biggest-colleges-in-the-united-states

No grandstanding by Harris or his family on social media.