Here is a recap of what was said during Saturday’s ceremony. 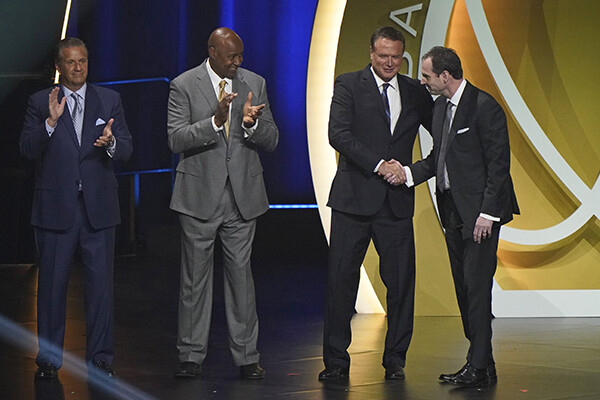 Eddie Sutton’s trek to the Naismith Memorial Basketball Hall of Fame came to an end Saturday.

Coach Sutton should have been in the Hall of Fame many years ago. He was a great coach. Great is used so much,it is a worn-out adjective, but he was a very special coach. His teams played such suffocating defense with great effort and all the while making few mistakes. He got every ounce of ability and effort from his players.

He took this program to prominence.

Eddie Sutton lead the Razorbacks into college basketball’s top tier. He was blessed to have the Triplets to raise the Hogs out of the sawdust of the old Barnhill. He also coached other great Razorbacks basketball players that won a lot of games. His style came from a different era, but his winning teams were easy to root for. Even though the transition to Nolan could have been better, Nolan’s great recruits did have the recent legacy of the Triplets, Big Joe, Walker, Robertson, Hastings and U S Reed to build on.

Eddie made Arkansas a basketball school. Nolan had even more success. Despite the failures of Heath and Pelphrey, Anderson started cleaning up the basketball program and left Muss several good players. Muss looks like he will keep the Hogs a top program. Thank you Coach Sutton. You started the great tradition that is Razorback Basketball.

So true rice. If not for Eddie maybe there isn’t a Nolan. Maybe AR is still swimming in the sawdust but,
We have to thank Mr Broyles also for striving to bring Arkansas basketball into the limelight.

Very true that Frank wanted the Basketball program to advance. He asked about the best young coach that was out there and this guy Sutton keep coming up.

Frank also was looking after the football program. He often said he wanted a good basketball team playing on those big recruiting Saturdays. He always saw all angles. Many football recruits mentioned the basketball game when they became Razorbacks much like coach Muss did the other day.