Eddie Sutton died tonight at the age of 84. 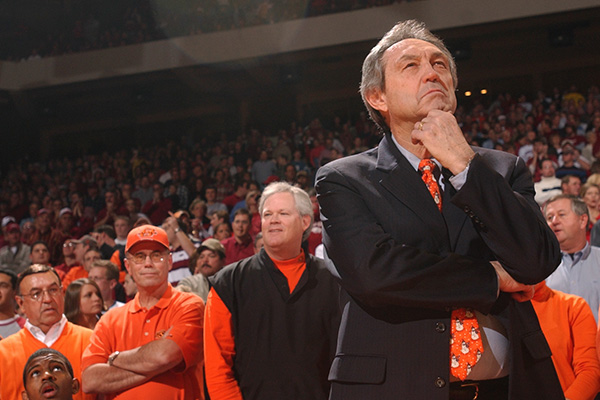 Eddie Sutton, who led Arkansas basketball to prominence, dies at 84

Eddie Sutton, who built the University of Arkansas basketball program into a national power and won more than 800 career games as a college coach, has died at age 84.

Saddened to hear. Prayers to the family.

I loved every one of his teams. 3 D’s on every practice jersey. There is a great picture of his final four team practicing in St. Louis ahead of national semi final, and the Checkerdome
Arena was full - from Arkansas fans - for a final four practice. The display in Bud Walton to him says “Awakening a Sleeping Giant.” I always shook my head at that as there was little b-ball before. Always thought better “Creating a Giant.”

My prayers go out to the Sutton family. What a great coach that accomplished so much and put our hogs on the map! It’s nice to know he made the Hall of fame this year! RIP!

RIP Coach Sutton. He laid the foundation for a national imprint for Arkansas basketball.
Prayers for his family and friends.

Prayers for his family. RIP Coach.

Sutton was a great coach at Arkansas…he coached my favorite teams during my days on the Hill in the 70’s. I know his family is very proud of him.

Very sad news. Like most Arkansas fans, he was my introduction to Razorback basketball. I probably didn’t even know we played basketball until he came and started winning. Then, I was hooked.

My favorite game in Arkansas basketball history that I attended was the North Carolina game in Pine Bluff. Sutton flat out coached Dean Smith. Look at the talent on each roster (we had some very good players, but look at that North Carolina roster) and tell me how we won that game.

Thank you Coach Sutton for some great great memories.

Prayers for coach Sutton’s family. We were blessed to have him as a coach of the Arkansas Razorbacks!

I’m so glad he was voted into the HOF before he died.

He created Arkansas basketball. Before him it was at best an afterthought.

Without Sutton, unlikely there would have been a Nolan Richardson, an Arkansas national championship, a Walton Arena, an Eric Musselman, or any Hog basketball tradition on which to build.

For those too young to remember, there was nothing like Sutton coached Hog basketball games, especially at a rabid Barnhill Arena (aka “Barnhell” Arena). Despite often being with lesser talent, Sutton’s disciplined teams & his game day coaching manipulated opponents, especially ut, into submission. He also coached & mentored his players to be successful in life - both on & off the court.

Knew this was coming, but still hard to accept. It was Eddie and Sidney, that made me passionate about Razorback basketball.

Great man and a greater coach. Thankful the Razorbacks had him.R I P Coach Sutton.

Although it seems a picture of Coach Sutton on the Arkansas sidelines could have been found to accompany the article.

He started it all. From a dirt floor to the Final Four. Truly one of the most amazing s transformations in sports history.

Coach Sutton was just a superb coach. Nobody wanted to play Sutton’s Arkansas teams. They were as well coached as any team in college basketball. He was a special coach.