I love that Fans of a school like East Carolina that has zero direct exposure to competing against UT all throw the horns down!

Piratey things going down in EC!

You got to love the Jack Sparrow pirate hat complete with dred locks they put on after homers. Classy!

Best part of the 8th was the ball flopping out of the OF’s glove and over wall for a homer with the ECU fans hanging over the wall 1-2 feet away just giving it to them!

Greenville is actually not a bad town. I was there fairly often in the job that I left at the first of May, and drove by the ECU campus occasionally. Including during a dawn football practice in February. All that purple got a little old, but it’s a nice campus. 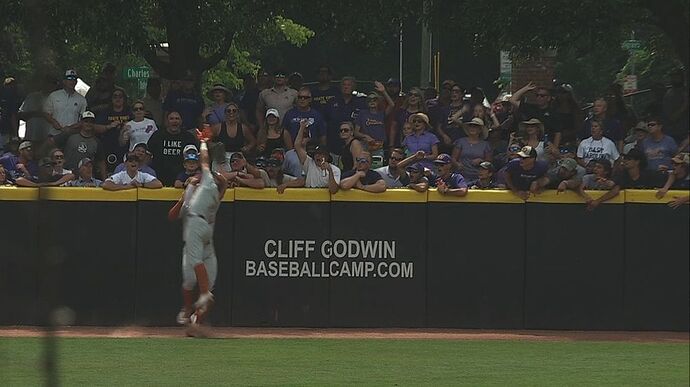 Oops! Ball bounces off Texas outfielder's glove and over wall for HR - ESPN...

Douglas Hodo III jumps for the catch, but it goes off of his glove and over the wall for an Alec Makarewicz home run.

Yeesh. Doug Hodo III is on the Texass team? His dad played for Texas when I was in school at UA (no, it’s not his grandpa).

A couple of the FB recruits at the Catfish Hole tonight had offers from the tea sippers. We all stood and showed them the horns down.