Anything new on Lang or Deal ?

Also what about the DT from Georgia, McDonald?

Breylen told Benton coach Brad Harris he was on his way earlier today. I know he visited Ole Miss yesterday but I haven’t heard anything that makes me think he’s going anywhere but Arkansas.

Last I checked with Lang, he plan to officially visit for the Bama game. Arkansas is in good shape with him. Will have to check on Deal but last I heard, I wasn’t feeling it for Arkansas. Things could obviously change.

Posted this on McDonald the other day. Will check in a few days to see if the visit has been set yet. Either way, I expect him to attend a game whether it be for an official visit or unofficial. I lean towards an official.

4-star defensive tackle Kayden McDonald will visit for the Bama game. Hasn’t been confirmed yet but it’s looking like it will be an official visit.

Waiting to confirm but I’m almost positive another target is at Arkansas now. As soon as I confirm, I’ll mention the kid.

If there’s a 2025 prospect who could be a candidate for being the first commitment in the class, it would be TE Davon Mitchell.

There’s no doubt Arkansas is in very, very good shape with him. 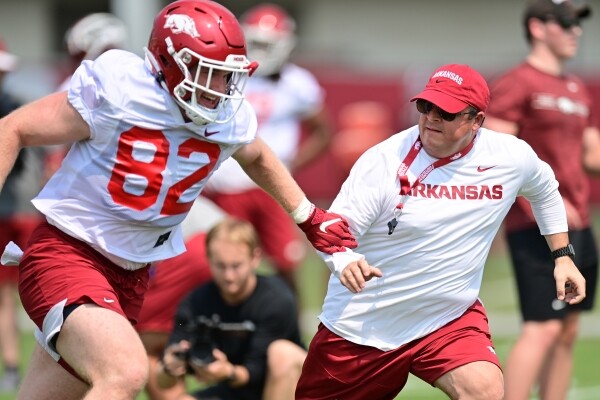 Arkansas will host approximately 25 prospects Saturday, the last big gathering of recruits until the Razorbacks kick off the season against Cincinnati on Sept. 3.

Waiting to confirm but I’m almost positive another target is at Arkansas now. As soon as I confirm, I’ll mention the kid.

This kid didn’t make it either. I was told he was coming but guess not.