Dudley: Who will decide

How many conference games will be played and who will be in each division? Will the AD’s have any say so or will it strictly be decided by SEC Commissioner?

I don’t think there will be divisions. I expect four four-team pods, which the conference office probably will assign. You’ll play everyone in your pod and two teams from each of the other pods, which means a nine-game schedule. Then the two best records play in the SECCG, with tiebreakers as needed. 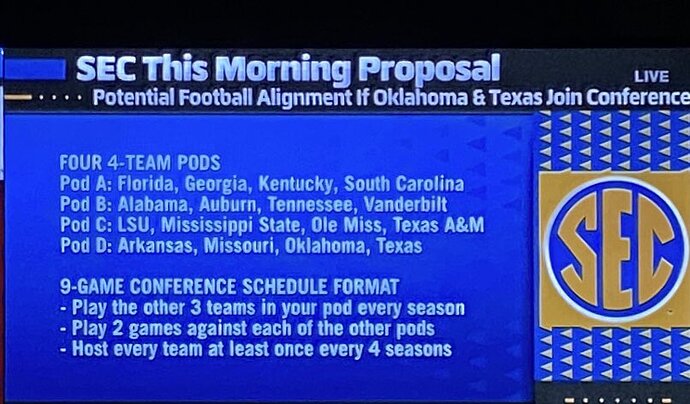 Conference office will have to assign. Otherwise everyone will want to have Vandy, South Carolina and us…

The pods listed above make some geographic sense, keeping in mind that A&M doesn’t want to be in EOE-A’s pod. That’s probably a good way to do it. The pod strengths to me look fairly similar.

What happens to the Tex A&M contract?

It runs out after '24. Which is just about when UT and OU would probably join. If they’re in for 24 the league could probably make sure that’s one of our six inter-pod games that year.

You could do the inter-pod games two ways: Two straight years, or every other year. For example, using the above pods, in '23 we could play at LSU, and A&M at “home”, then reverse those the next year. Or we could play Ole Miss and at Moo U in '24 instead.

I bet Texas and OU join in 2022. There is no way the Big 12 would want them to stay for 3 years knowing they are leaving. TV deals can always be renegotiated.

You could be right. I’m thinking it will take them about 18 months to disengage, which would allow 2023 for football, but that could be accelerated.

Lots of why it might happen sooner in here. 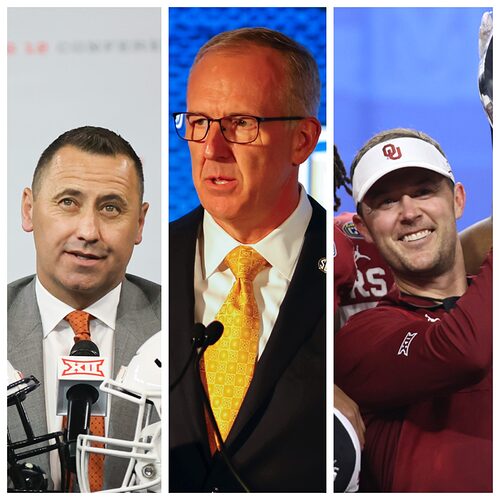 First and 10: Inside the pursuit to poach Texas and Oklahoma … and what it...

Yes, Texas A&M knew long before Media Days. No, the Aggies can't (and won't) stand in the way. Here's how the SEC will add 2 of the biggest brands in college athletics.

Yeah figures they would stick us with Texas and Oklahoma…smh

Better than Bama and LSU. Which we’re stuck with now.

Hey, Bluegrass! Good thinking! We can name each pod–ours (pod D above) could be the Killer Whale pod, vs the Red Tide pod (pod B)–and have Pod Championships.

True dat but was just saying figures we would get stuck with them .

It is my understanding that SEC presidents and chancellors vote on expansion and whether to approve it or deny it.

Then after that approval, SEC Commissioner Greg Sankey and the members’ ADs work together on scheduling, something that have a model for yearly.

So one would think that Sankey and the ADs - who probably already have an idea of how a 16, 18 or 20-team league would work with divisions, pods, 8, 9 and 10 conference game scheduling.

This thing has apparently been bubbling for awhile, not just last week.

I bet Texas and OU join in 2022. There is now way the Big 12 would want them to stay for 3 years knowing they are leaving. TV deals can always be renegotiated.

I don’t think there’s any way it will happen that fast. Keep in mind that ESPN is not (yet) the only broadcaster involved and - unlike you - I’d think FOX (or Bally or whoever they are today) would want to keep their foot in college football as long as they can.

Plus, there are a LOT of scheduling issues with that many teams. I’d say 2023 ATTHE EARLIEST, and it would not surprise me in the least if it’s 2024.

I predict that the lawyers will come out of this billing a lot of hours to the SEC, B12, Texass, OU, ESPN, FOX and no telling who else.

That would be really dumb. Because we’re expecting to get multiple playoff spots. The SEC winner would then have to play 17 games to win the NC. It’s been suggested that instead of a bunch of tiebreakers, the SECCG teams would be the top two SEC teams in the CFP rankings, which I guess would be an option.

If we play that one year, the next year would be Vandy, KY, SoCar, Ole Miss, Moo U and Tennessee.

Keep in mind that ESPN is not (yet) the only broadcaster involved and - unlike you - I’d think FOX (or Bally or whoever they are today) would want to keep their foot in college football as long as they can.

Where did I say that only ESPN was involved? I have seen several reputable nation college football reporters say that there is a very good chance that this will happen in 2022 and that contracts will be negotiated in the next few months, well before 2024 when the TV rights are up.

ESPN will more than likely get the contract considering that they own the LHN and the SECN. LHN will fold into the SECN.

It’s going to happen sooner than you think.