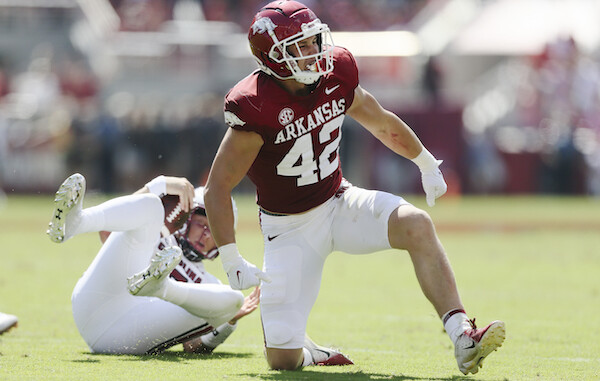 Arkansas linebacker Drew Sanders was named national defensive player of the week by the Walter Camp Football Foundation on Sunday.

He was all over the field, he will only get better as he gets more accustomed to playing inside… very well deserved

He was a one man wrecking crew yesterday. Richly deserved honor. The kid is just an animal. Go Hogs!

Congrats to him!! Wonder what ole saban think’s now.

The term ‘generational player’ is way over used now a days!

I hope Coach Saban doesn’t recruit him back to Alabama.

Congrats to him!! Wonder what ole saban think’s now.

I believe that Saban said publicly, in an interview a week or so ago, that Drew would be starting for Bama this season.

“…I hope Coach Saban doesn’t recruit him back to Alabama…”

Another facet of just how ridiculous is the whole transfer thing as it now stands.

Players can only transfer once right now without sitting out a year. That is to say that a second transfer as an undergraduate would require a redshirt year.

That can be waived for various reasons, most notably if a player transfers with a degree and seeks a Masters elsewhere.