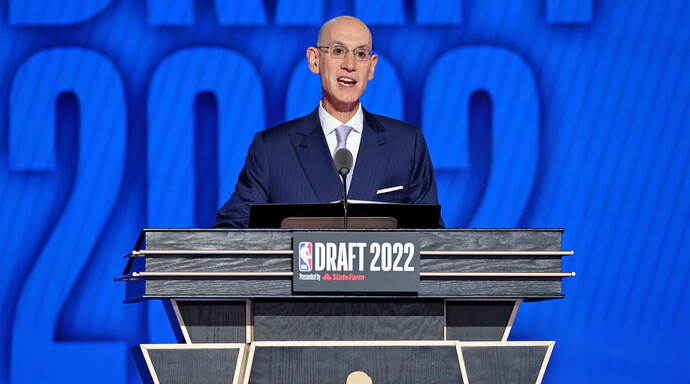 It’s gonna happen, and how can it not? Everyone is entitled to everything these days. It won’t be good for college basketball, but the NBA doesn’t care. Better enjoy players like Nick, Jordan, and AB wearing Hog jerseys now, because in a couple of years, the NBA is gonna be drafting the entire Mickey D’s AA team. I’m just glad we have Muss, because he can adjust on the fly. The Squid…probably not.

Unfortunately, there will be collateral damage. Some kids, and their families, will make terrible decisions. Again, the NBA doesn’t care. The NBA is a for-profit business. They don’t care if a few eggs break along the way, as long as they have their cake in the end. Sad, but true.

I feel for kids like Bryson Warren. They gave up their youth before they had to. I hope it was worth it.

Makes no sense to me why they would want to do this. College basketball is free OJT, better vetting process than HS provides, allows players to develop followings of fans from their college school that will increase interest in NBA, gives immature HS guys a little more time to mature before being out on their own…And from the NBA players perspective, the age limit protects their jobs to some degree, so not sure why they would support it.

I’m just glad we have Muss, because he can adjust on the fly.

Absolutely! All we have to do is look at the last 2 years. He took 2 very different teams to 2 straight Elite Eights and didn’t have a single 5-star player. He beat teams with multiple 5-stars the last 2 seasons. When no team has multiple high 5-stars, we will still have an edge. Muss will still get lower ranked 5s and high ranked 4 stars, while tearing it up in the Portal. We just have to be able to keep Muss.

There will undoubtedly be kids who think they’re pro-ready and aren’t, but that’s the case now.

If a young man is only interested in basketball, and not a college education, then he should be able to pursue a basketball career straight from high school without the burden or taxpayer expense of attending college.

He can always come back to college, it just might not be on a basketball scholarship.

Colleges are supposed to be educational facilities, not OJT devices.

Colleges are supposed to be educational facilities, not OJT devices.

Yep, wouldn’t want to confuse them with a gateway to a better future. Four years and a sociology degree or bust!

What if you went to college for 1 year and learned enough in your computer science classes to start a tech business making millions? Would that also violate the noble purpose of higher education?

Like Elizebeth Holmes, one year at Stanford then made billions… never mind.

I don’t think it’s a good idea, but the NBA doesnt interest me in the least anyway.

Who’s gonna tell him about the wonderful world of internships? Labs for the medical sciences?

College can offer a lot of life changing opportunities with a mix of academics, networking and OJT if one knows how to navigate it. Bob your statement is rooted in oblivious ignorance and shows a complete lack of understanding of how things have worked in the college ranks for the past 40+ years for any student who is motivated enough to get after it.