DMAC on the loose 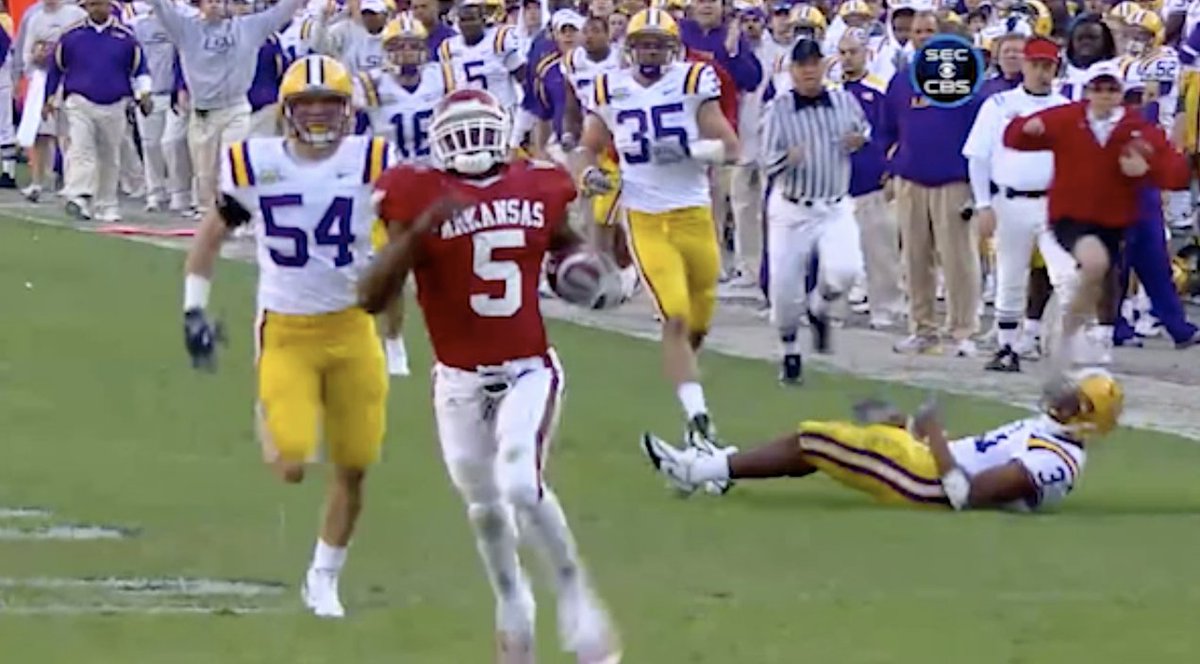 At the time, I was sure Casey was going to clip. Still makes me nervous.

I was wondering the same thing. Today that might have been called a blindside hit.

Watching that, I came up with six runs that I remember best from McFadden, including the first three in that highlight. None of the other three - the 70-yarder at Alabama in 2005, the 63-yarder at Auburn in 2006, and the 80-yarder against South Carolina in 2007 - were in there.

So fast and quick. I too really worried about the Dick block.

I remember that first TD punt return against GA his freshman year. I thought then, Wow! How did he do that?

One thing that’s rarely mentioned about that gifted backfield, they had a great line in front of them.

He always amazed me at how fast he could accelerate through the line and especially once he got into the open field.
He should have had a H trophy in his trophy case.

And watching that will remind you why the WildHog was such a great play. It’s not good for much if the person getting the direct snap can’t complete a pass. D-Mac was such a talented player in so many ways.

I love that run against Georgia when he was a freshman when he busted through that hole and just flat-out outran every one of their secondary people who had the angle,you could tell they were absolutely amazed at his speed, as were the announcers.

Here it is with the great Larry Munson’s call.

That game against Georgia was DMac’s “coming out” party. He looked like he had been shot out of a cannon on that run. He was young and strong and probably his quickest and fastest. He was the most exciting and best player in college football his last couple of years. When he touched the ball, you just held your breath. I won’t ever forget him. He was the best player I ever saw wear a Hog uniform.

I remember the legendary Georgia football announcer, Larry Munson, describing that McFadden run. It was great Thanks for that, Matt.

Great point. Most don’t realize that Jonathan Luigs, Tony Ugoh, Stephen Parker and Robert Felton all were voted All-Americans. And Mitch Petrus was two-time All-SEC. There was great line play during those years.

Yes that was awesome!! “Did you see him just run away from us!!”
I was at that game and you could just hear the unbelief in the stands from the Georgia fans they were stunned!

Larry Munson: Zip, there he went!

The screen pass against Ole Miss in '06 where he tiptoed down the sideline deserves honorable mention too.

Here it is with the great Larry Munson’s call.

I’m late to the thread, but that’s the play I ALWAYS think of first when I think of DMac…and this is THE call I remember, as well. “Did you see that…did you see him pull away from guys?..So that’s what we were supposed to be worrying about!”…

The acceleration in the first 30 yards is exhilarating!

I was with Claude Felton, the Georgia SID and a great friend, before the game. Larry Munson came over to visit. Claude introduced us and I started telling them about McFadden. There was a comment from Munson to the effect of he’d seen a lot of great SEC backs like “Walker and Jackson.” Would he be of that caliber? And I said maybe. I’d seen Billy Sims, Barry Sanders and Earl Campbell. I said this guy has a chance to be really good, too. I sure I would have said, “He’ll yes!” But I didn’t.

I don’t know how widely know it is, but Paul Eells was hired to replace Larry Munson as Vanderbilt’s play-by-play man prior to the 1967 season after Munson had moved to Atlanta. Actually, Paul was hired by WSM Radio - later WSM-TV - which had the rights to Vandy’s football and basketball games. I still remember the Paul Eells/Larry Munson tag-team intro in 2002 prior to the SEC Championship Game. How ironic it must have been to them to be in opposing booths all those years later.

Paul would have been in the other booth for that McFadden run in 2005. I wish I could find that call.