Dmac and co.HighlightsThis will put a smile on your face

Classic Tailback - Darren McFadden & Co. Arkansas Highlights - YouTube.
You forget just how Amazing that backfield was!! The speed of Dmac and Felix was just world class!! We have not had anybody since even close to explosive as they were…Wow…just Enjoy! 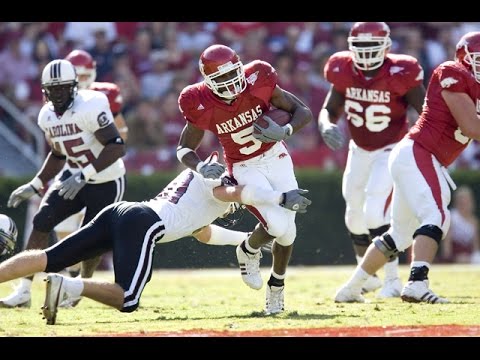 Was the horse collar a thing during this stretch? I am thinking that started later because I saw a lot of horse collar tackles on DMAC.

I think it was,Dmac got horse collared against SC… very good way to get hurt badly.

Those were some exciting days. With a backfield & Oline like that, sure didn’t need Gus’s hunh offense that year.

Thanks for the uplifting link, what a backfield with a smash mouth OL.

Yeah it’s really easy to get caught up looking at those great backs,but if you look real close at the OL like I do, you see that the OL did a much better job of driving off the ball and getting to the next level. We must get our current offensive line to do that.

Casey did a pretty good job getting some tosses to Peyton. Peyton might want to re-think some of his comments.

D-Mac lost just a little speed with his toe injury but he was still one hell of a back!

It still amazes me that we didn’t win a natty with that backfield.

In one of DMAC’s scores against LSU Gary Danielson said college football was changing, referencing the Wildhog formation we were using. Honestly I don’t really think it was the formation so much but the combination of superior athletes we had in the backfield executing it.

To much drama & distractions in those 2006/07 seasons. The wheels were falling off.

Those teams lacked two things: Shutdown defense and elite QB play. We were just hoping Mustain and then Dick didn’t do something to get us beat. They couldn’t win a game if the opponent took away the running attack.

Speed and power! Those were SEC backs.

Yep very true… one of these days we’re going to get it all on the same team… hopefully will be in my lifetime.

I second that thought.