If so, not a great look for a guy that has no problem making a living off of Razorback sports. 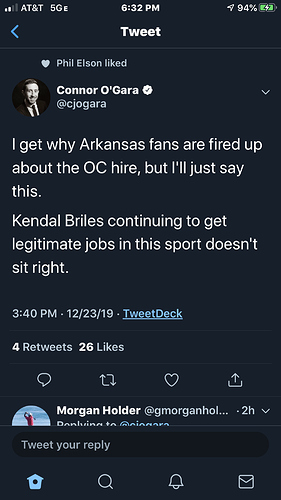 What about Lane Kiffin? he used the Tennessee spirit squad girls to entertain the recruits when he was on Rocky Top, and he is getting even more legitimate jobs than KB…no tweets about his high level employment.

One has to agree with everything the UA does to talk about them on the radio or call their baseball games?

In my mind, if you work for the University of Arkansas Athletic Department you should not be publicly criticizing a high profile hire like this one. Not a good look at all given this hire is controversial to some.

Did he publicly criticize the hire?

Look at the tweet he liked before that one

Twitter is a public forum and he liked a tweet from a writer saying he does not feel good about Kendall Briles getting this job.

I saw it - perhaps he did not intend to like it.

I tend to agree with you on this Jackson. Phil should probably have just read it and moved on considering his job because too many will perceive it one way or the other.

Someone asked him about it and he said it was not meant as an affirmation nor was one he likes that was positive about the hire.

In other words he laid out on the situation!

There will be some in Arkansas and elsewhere that question a hire whether it be Briles or anyone else.

His explanation on Twitter about liking the two tweets that have opposite viewpoints on Briles - makes sense.

“Yes they’re at odds with each other. And both of those guys are guests on Halftime each week so I’m interested in their viewpoints.”

Pretty much a life long fan of Razorback baseball. I find it difficult to like Phil Elson. The way he calls baseball games turns me off. He is in love with his own voice and he thinks the fans should be also. He tries to be witty and and entertaining with lame crap during a game. His running theme of whether it is a “foul poll” or a “fair pole” is just one small example. I would chip in to bring Chuck Barrett back to the booth.

I would chip in to bring Chuck Barrett back to the booth.

Not going to happen. Chuck stopped doing baseball because he is now married, living in Florida and doesn’t want to spend four months on the road (and away from his bride) in the spring doing baseball.

Interesting - I like Phil as a broadcaster and wish he was doing football and men’s basketball!

To each their own!

For those of you who did not know, Chuck is the son-in-law of Bobby Bowden

For those of you who did not know, Chuck is the son-in-law of Bobby Bowden

I did not know that. Never heard who he was marrying, only that she lived in Florida

I had no idea. Thx for posting it

Not a big Phil Elson fan myself on the baseball broadcasts.