End of the game, Devo dribbles down low, 3 defenders collapse on him, can’t even see Devo . . . then facing away from the basket with one hand toss up and in. . . that has to be the craziest shot ever. The LSU defenders were left sitting there wondering what the heck happened.

I was too. I thought it was another Devo out of control turnover. Shows what I know. Also shows the will to win no matter what it takes. Still have no idea how he did that.

Devo didn’t get to his spots last night for his shots. The corner 3, the 10 to 15 foot mid range or to the rim.
That circus shot he made was a miracle.

We needed that miracle. No doubt he was hacked and shoved while in there with the trees. They were constantly grabbing and pulling our guys away from the basket and shoving and going over the back. They probably got away with a dozen uncalled fouls. We got away with some also but not near what SAO got away with. Have to chalk this up as a miracle.

Refs called 40 fouls last night (25 on them) and it could have been 60. Lots of slapping. Fortunately they called that last slap that put JD on the line.

More of a chop IMO

There was some freaking out going on. That shot made it 35-35. But the BWA scoreboard still read 35-33 halfway through halftime, according to some tweets I saw from the arena at the time. They weren’t sure if it had somehow been waved off, even though I distinctly saw one of the refs signal the basket counted at the time.

By the time the second half started they had the scoreboard straightened out. And boy did we need those two points, and it was a heckuva way to get them.

Umude is a key player on this team. Thankful he picked the Hogs; he had a bunch of suitors.

why did Devo lost the headband during the game??

Maybe he was trying to disguise himself

did Devo lost the headband

Devo frequently alters his wardrobe during a game to change up bad ju-ju.

He’ll change out his headband, undershirt, socks, & shoes … whatever it takes.

Speaking of the “Headband”…I thought of this during the LSU game when we had I think four different guys wearing them. Did Bobby Portis begin that trend at Arkansas? I am thinking he did.

We’ve had a few before BP. Michael Washington wore a headband for instance. 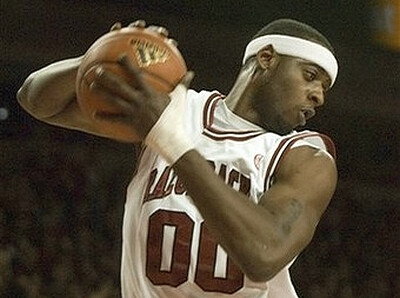 So did Ronnie Brewer (and somebody behind him) 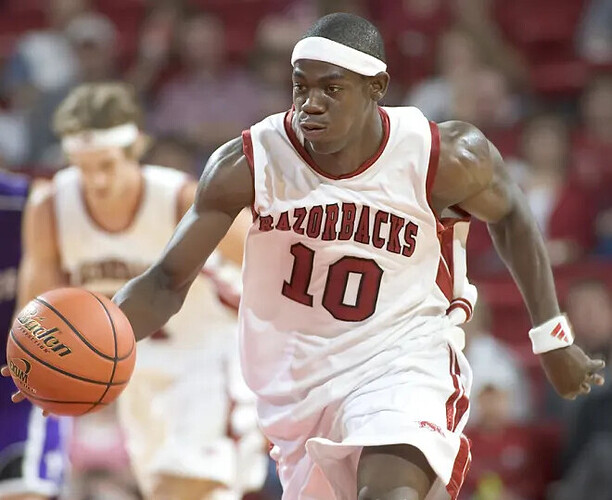 Just huge. Umude has really impressed me. His game and demeanor have just been great.

I thought Devo was counting on a called foul (other than the call he didn’t get while in the air), even after he landed and regained control of the basketball. Kind of a throw it up for the “and one” play.

What other choice did Devo have, after fighting and clawing thru the 1st opening he saw.
Surprised he didn’t lose another tooth in there.

Jonathon Modica was the first that I vividly remember wearing one. Though I’d imagine some others did before him. 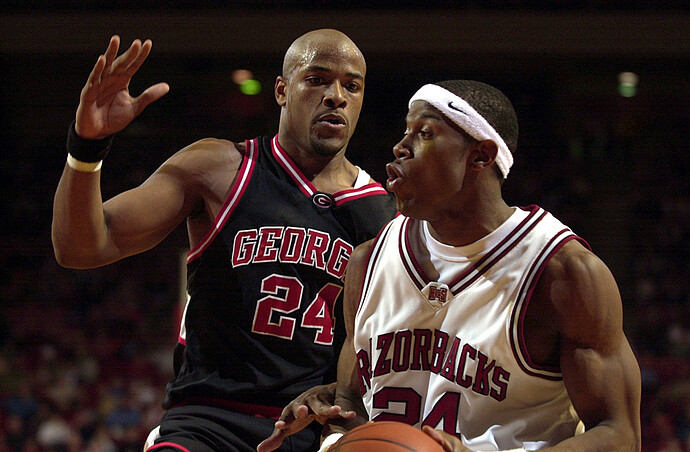