Desi Sills was phenomenal off the Arkansas bench against TCU. More on his efficient 18-point showing on Saturday: 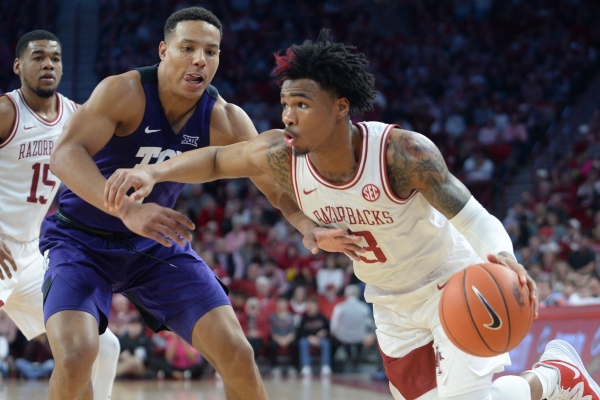 'I had to be ready': Sills stars off bench against TCU

A change in scenery, as Arkansas coach Eric Musselman put it, alleviated a bit of pressure and simply allowed Desi Sills to play his game against TCU.

Was a great game for Desi and Jalen to step up. Happy for those guys. I really thought Desi may lose minutes to the freshman next year but he is so good defensively and going to the hole and finishing.

When he scores 15 plus he’s the best player we have. He just can do so much.

Desi let the game come to him yesterday. All the 3’s he made were good shots in the flow of the game. He didn’t force those 3’s like he has done in the past. He is a great competitor. He is all out.

Scottie, a little bit off topic of this thread.

Muss’s defense did a far better job in holding Desmond Bane to 8 points than Chris Beard’s Texas Tech defense. Whitt was on him like glue and denied him the ball a lot. But after watching Bane yesterday and he did get the ball some, I wondered how the heck he scored 27 on Tech.

When I first saw him on the floor, one look at him and I could tell he wasn’t going to be a quick guard that can bother us that much. But as the game progressed I was less and less impressed with him. He looked like poor man’s Isaiah Joe. He showed a good looking stroke but didn’t take any deep deep shots like Joe does, so I am assuming he doesn’t have the range that Joe has. He showed no ability to create his own shot or drive to the hoop or take over the game.

How the heck did he score 27 on Tech? Did the Tech defense allow him open shots the whole game?

I’m not Scottie but I watched part of that game. The man guarding Bane didnt have the wing span that Whitt has and Band was smart and don’t force anything. The few open looks he got he knocked down. 2-3’s! He can put the ball in the hole. Whitt just stayed after him! Chances are CHRIS Beard will watch the tape and take some notes of what the hogs did to slow him down.

Not having watched the game I’d be hard pressed to really say. Bane just got loose beyond the arc, knocking down 6 of 8 from 3-point range vs. TTU. He did hit one 3 on Saturday that wowed the arena, but, like Eric Musselman said, Jimmy Whitt was really good defensively. Muss said he’s coached two NBA-level defenders, and Whitt is one. Tech is great defensively as a group, sixth nationally in defensive efficiency, but it may not have that NBA-level guy that can simply hound a bigger guard.

Bakedog said the same thing to me about Whitt. That is one of the reasons in another post, I mentioned that if someone has to sit out a game, hope it is not Whitt first and then Sills as my priorities.

Coaches of course get credit for wins, but as Nolan always said 80% of coaching is recruiting. Muss convincing Whitt to transfer here is Muss’s biggest contribution to the program so far.

I think it was poster Harley who said after the second game this season that Whitt is the glue for this team. He was spot on.

that Whitt is the glue for this team.

Whitt is playing in his 5th year. It’s tremendously important for a program like Arkansas’ to get it’s top players to a 4th or 5th season, because they (we) just don’t get a lot (or a few or any) 5 stars each season like a KU or UK.

The only Arkansas guard of Whitt’s size that I remember with the ability and desire to completely take another guard out of a game (without fouling) was Sidney Moncrief. Alvin Robertson and Darrell Walker both played tenacious defense, but they fouled. Both played the passing lane more than Whitt. I’d say the same thing about Corey Beck. Beck just beat you up physically until you didn’t want to play anymore. He’d bump you at every turn. He’d tell you that he did foul. He just didn’t figure all of them would be called. Sidney did not foul. Neither does Whitt.

Sidney (and Whitt) do not allow their man to touch the ball. That’s the most effective defense of a scorer. I think most understand that.

Sidney did not foul. Neither does Whitt.

That’s quite a testament about Whitt, as I always felt Sid was the best.

Sid could flat out ball! Comparing Whitt to Sid is high praise. I just hope Whitt can continue to play solid.

Good point about Sidney. Whitt’s seven foot wingspan is a big asset in what he does. Do you recall what Sidney’s wingspan was? He did have long arms.

I remember Jim Counce being the lockdown defender for the triplets.

Would He take on guards as well as big guys?

We put Sid on Larry Bird When we played Ind. St. It was at the end of the game and we had to have stops…Then some unknown hit a shot on us. Sid could guard anyone.