Dennis Dodd on where we go from here

Pretty wide-ranging, from the future of the Rose Bowl, to the playoff, to Notre Dame’s future, to the creation of the Power Two.

He notes that a sports TV guy said this week of the potential for realignment, “Everybody is talking to everybody.” And that was BEFORE the USC-UCLA news broke.

Meanwhile, USC seems to have had a bit of Texas syndrome; they thought they brought more to the P-12 than it brought to them, have been threatening for ages, and finally followed through on those threats.

And the Big 12 seems to have no interest in the West Coast Orphans at this point, although adding the Arizona schools is not totally dead.

Meanwhile some culling is not out of the question. Could the SEC drop Vandy and Misery to make room for Clemson and Florida State? Out with Indiana and Purdue, in with Oregon and Washington? A longshot but not impossible. I’d have been a lot more nervous a couple of years ago; Sam has re-established us as a credible football program. 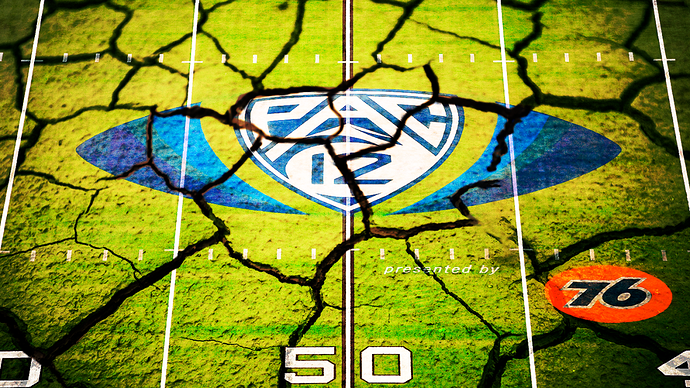 Back when A$M came in the talk was that the SEC would not take another school in the same state. That is obviously out with Texas coming in but that may be an outlier since the state and both fan bases are so big. If the model is going to be two “Conferences with multiple(probably 2) divisions” Ala the NFL, could the SEC expand westward and attempt to cherry pick schools? Oregon, Washington, Arizona, possibly Colorado to keep the geographic “solo school” per TV market concept. That thought may be out the window now but Florida may not want FSU and SC may not want Clemson. This will be fascinating to watch play out as conference politics will play a big role in who goes where.

That was based on TV footprints. Not completely invalid now, but much less of a consideration. I think they’re now thinking about attracting the casual viewer (or streamer) who lives outside the SEC or Big Ten footprint. A USC-Ohio State game will attract attention. So will Clemson-Alabama, or Florida State-Auburn.

Since ESPN-ABC will have the total SEC package, they don’t care as much if the viewer consumes it through ESPN+ or SECN or regular ESPN, as long as they consume it.

I am going to advocate changing the name of the SEC.

It can’t be called the SOUTHEASTERN conference with schools like Washington, Arizona. Etc, can it?

We can keep it as SEC though…

I don’t think the SEC will go that far geographically. The Big Ten can and probably will. Anyone we add is likely going to be raided from the ACC or the Orphan Eight.

But it would be interesting if Cal and Stanford called Sankey, That much academic prestige (and 19 Directors Cup titles) would be hard to turn down.

Stanford has to be very attractive.

Stanford baseball wants nothing to do with the SEC.

Stanford baseball wants nothing to do with the SEC.

Like the school president is going to ask the baseball coach…

Why would the SEC not go after Clemson and Florida State to join? Shuck Vanderbilt and Missouri. Of course, Arkansas might be a shuckee, but our sports programs are better than Ole Miss and MSU. Their claim to fame is longevity in the SEC. Fasten your seat belts. This should be fun.

Can’t see Cal and Stanford fitting in the SEC culturally.

I agree. Same applies to the Big 12. Question is, are they willing to drop out of the Power 5 to maintain their culture?

Question is, are they willing to drop out of the Power 5 to maintain their culture?

Can’t speak for the Trees, but for Cal I believe the answer is a resounding yes.

I live among scores of Cal alumni, and they could not care less about collegiate athletics. They feel money is totally wasted on collegiate sports, and that sports venues are a complete waste of valuable real estate on college campuses.

Now getting them to shut up about Niners football or Warriors basketball is another matter.

I suspect you’re right about Cal; if the alums don’t care, the school doesn’t have much incentive to care either. But I think the Trees like where they are in the top two of the Directors Cup every year, and they won’t be there if they’re no longer in the Power 5 (there are two non-P5 schools in the DC top 30 this year: Princeton and BYU).

I would hate to see Stanford and Cal end up like San Jose State athletically. There are always eggheads on the faculty (or alumni) who want to see athletics cut down to size for purpose of self-satisfaction. A lot of publicity would be lost, and D2/D3 athletics aren’t exactly inexpensive. Compare Berkeley to Cal Santa Cruz (D3) or Cal San Diego (D3). Which one shows up on the news feed every day?

I would hate to see Stanford and Cal end up like San Jose State athletically.

If they want to be U of Chicago, which went from the Big Ten to (eventually) D3, far be it from me to convince them otherwise. Or Sewanee (SEC to D3 and not even considered a national university). Chicago happens to be tied with Stanford in the US News national ranking at #6.

Actually UC-San Diego is D1; they joined the Big West in 2020. But yeah, the mighty Banana Slugs are D3.

Those Cal-State and U-Cal system schools are all remarkable academic schools and will survive, if not thrive, with or without athletics. Just like U of Chicago.

If the SEC expands to whatever size it deems optimal, I think it sticks pretty much within the southeastern quadrant of the US. There are still plenty of schools to choose from if that’s the direction we go. Clemson, FSU, Miami, VaTech, VA, UNC, NC St., Okie Lite. Add all of those and there are 24 teams. Maybe the BIG gets to 24 and suddenly there are 48 teams in a Power 2 division. It could even make for a 48 team playoff. College football Nirvana for those who think the NFL just isn’t NFL-enough.

If they want to be U of Chicago,

I thought about U of Chicago when reading this thread. I could see Cal doing that. Stanford? No. Could be wrong.

My son has been predicting we would end up as 2 big conferences for a few years. I didn’t agree, but I think it is more a difference use of the word “conference.” A “conference” that has 25 to 30 teams in it, is not a “conference” in the way I use the word.

As all of this is being driven by football, it is really weird to me. There is the real possibility that football will not even exist as we know it in 25 years (all the CTE cases, etc.)

I could see Sankey and Warren saying, “OK we’re this big, nobody else is close, let’s have our own 8-team or 12-team playoff and everybody else can lump it.” Including Notre Dame. You wanna play for a natty, Domers? You gotta join up.

There is the real possibility that football will not even exist as we know it in 25 years (all the CTE cases, etc.)

Also possible, but as we’ve seen since 1992, conference memberships (and existences) are extremely fluid. How things are now is not how things will be in 2052, IMVVVHO. Do they restructure around basketball or soccer in that case? Maybe.

I think, though, that football will exist in some form in 2052. It may not be recognizable as what we know today as football, but then an SEC with Texas, Oklahoma and Arkansas wouldn’t have been recognizable 50 years ago either.