I spoke to Nate Thompson and Will Gorden, Moore’s high school coach, about the traits that have led to his early success. 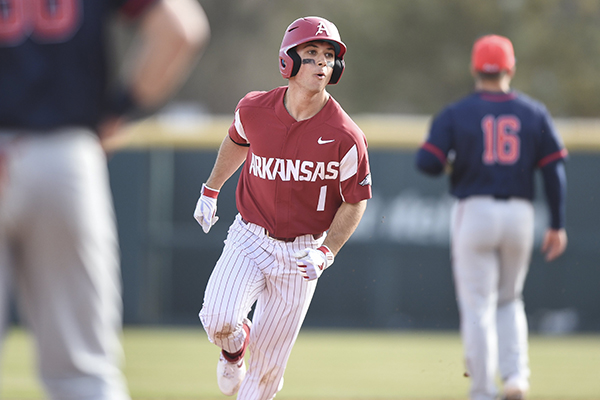 The KC kid: Moore's fast start no surprise to those who have coached him

Arkansas freshman Robert Moore showed the all-around play over the weekend that made him one of the most coveted baseball recruits in the high school class of 2020.

Really nice article, Matt. He is a phenom, it appears. Kind of like a Tiger Woods, maybe. I have not seen the team play this year, but saw one clip. He has a quick bat.

He looks to be about Casey Martin’s size. What kind of hitter do you think he will grow into? Is he a singles guy or kind of like Martin…a smaller guy with a lot of pop.

He is a little smaller than Martin. I don’t see him ever being much of a power hitter, but he showed the other day that he can hit a home run. He’s more of a line-drive hitter who is probably going to hit a lot of doubles and maybe some triples because of his speed.

Great article Matt! I love watching him play! you can tell he’s been around baseball parks all his life and is far advanced IQ wise than most kids even several yr older than he is.He reminds me a lot of Madrigal the great second baseman for Oregon State… same size, speed, great defense and so far Moore has shown he can hit .Madrigal proved it over a long period Of time so time will tell