Wow what a wreck coming to the checker flag. Ryan Newman’s car got sent on to its top and he was his by a car while upside down. Praying his okay!

Prayers go to him. What we saw today is not racing at all. To many wrecks.

I fear if there were no wrecks NASCAR in racing, few would watch it.

People did 20 yrs ago before Dale Sr’s wreck.

I know this isn’t a racing board, but from reading different sources, if you are a race fan or not, prayers need to go out to him and his family. 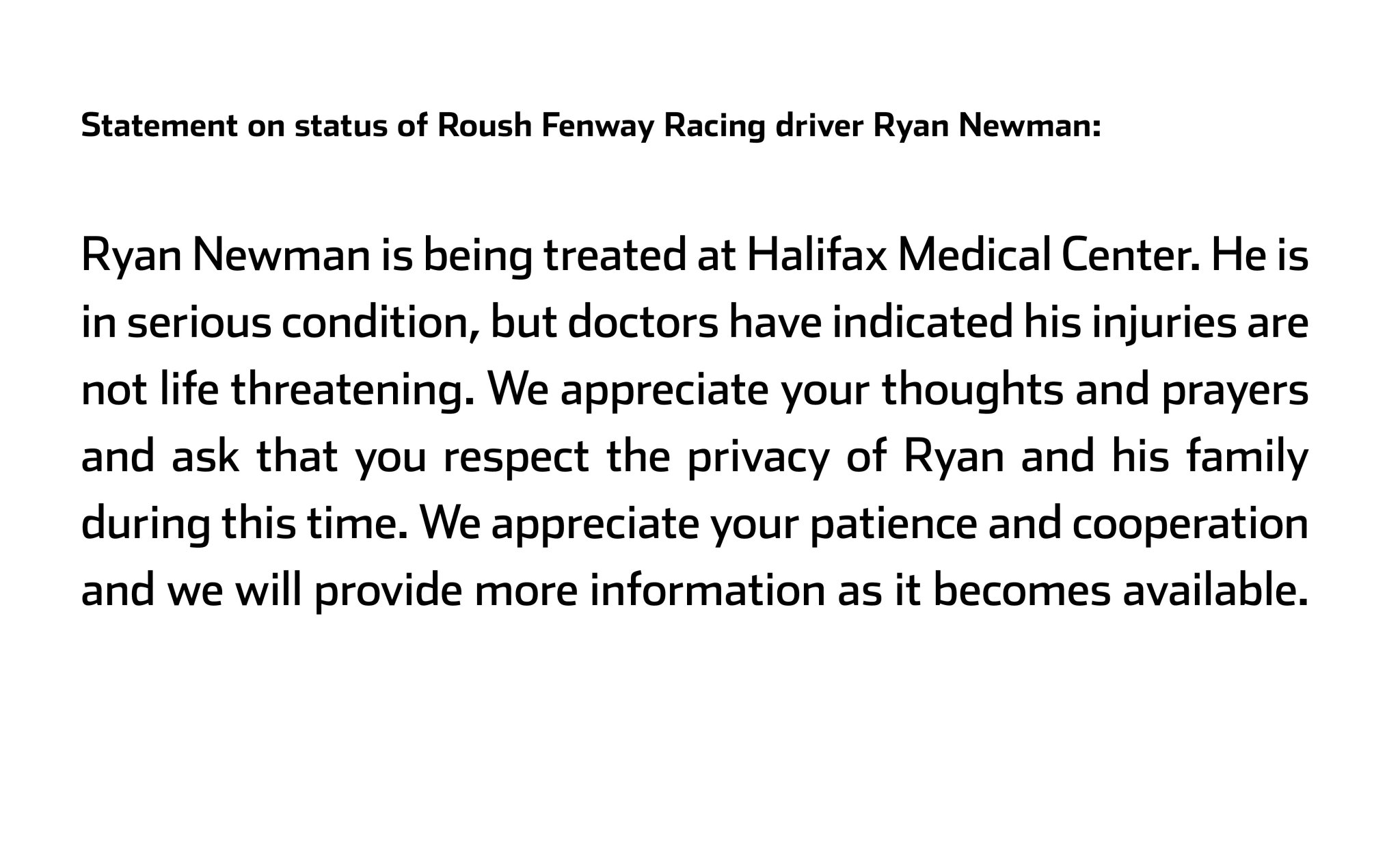 Not his week for sure after recently reading that Ryan and his wife of 16 years were in the process of separating. I certainly hope & pray for a speedy recovery and extremely concerned that the media is still quiet on his latest condition.

The new package they ran this year needs to be scrapped! That was insane the way Hamlin was able to be passed jump right back in line and draft right back up like that to cause that wreck.

Seems like all they do at Daytona and Talladega anymore is wreck each other. To me, that has taken all the fun out of nascar.

There are pros and cons. I mean, rubbing is racing yet at the same time if we’re scooting down the pavement at over 200 miles an hr. don’t nudge me however slightly you think it is to see if I’m chicken --hit or not. Dale jr. lived by that rule and although I had no ill will towards the man, Mark Martin seemed to drive pretty dang spectacular as did Jeff Gordon and a few more successful drivers that didn’t have to bump you out of the way to win a race.IMO which I’m entitled to same as you so calm down and GHG!!!

What took the fun out of nascar was losing North Wilkesboro and Darlington!
Taken the bug fuel tank out and putting the 5 gallon can in the car! These young drivers have never ran a real full fuel run and half of that run on worn tires. Taking the shift away from drivers at Pocono. Today’s Nascar is the Iroc series of the old days!
These are the terms or works that I hate about the new Nascar!
Stage Racing
Lucky dog. Free pass position
Chase.
You could put some of these young drivers in one of the old cars and have them run a full load of fuel and they would be crying.

pg, right after Talladega opened we lived about 25 miles away from it and we went every year back then in the glory days richard petty pete hamilton the allisons bakers the list goes on that help jump-start nascar on the big tracks from '69 - current and of course big time wrecks have ALWAYS brought more excitement but back then it seem like if someone wrecked it was because of an excuse me accident. Now days they wreck someone intentionally and at will .I don’t want to see bumper cars go 200 mph well maybe lol seriously, I enjoy a classy more civilized if you will and even duller, safer race. When it comes down to the last two laps and all the marbles are riding and it’s intense pressure, oh yeah it’s fun…but I don’t want to see anyone lose their life.

The first year my wife and I went to Talladega was the year Bobby Allison blew a tire on front straightaway going over 200mph and got up into the catch fence. Seems like back in those days there was more give and take between drivers, they knew when to bang on each other and knew when not to.

I’ve spent some time around NASCAR racing when our company was a primary sponsor. The drivers DO NOT like the super speedways which are Talladega and Daytona. I was sitting in the hauler just prior to Talladega with Marcos Ambrose (our driver) and asked him how he liked racing on super speedways. He said that super speedways were his and all others drivers least favorite race tracks. He said it was a good day when the race was over and no one was hurt or killed.

Speeds on these long banked tracks exceed 200 MPH and the wrecks are just plain scary.

Prayers for Ryan and his family. That was really horrendous.

The super speedway’s and restrictor plate races have killed Nascar. That is unless you like watching wreck filled carnage like yesterday. I would never spend money to watch one of those races! I am surprised more have not been killed in those races. Nascar needs to return to its roots. The smaller family friendly tracks . Tracks such as Richmond, Rockingham, etc. Prayers and thoughts are with Ryan and his family.

I remember a dirt track in Beebe, seems like it was about a quarter mile and cars would occasionally skid off the track in turns an end up in an open field and just turn around an get back on the track. And there was a small track on the Saline/Pulaski line
and I think Mart Martin began there. I did like racing in those days but do not care for NASCAR now.