Okay this is just for a slow day while I’m killin time until the softball game.

DVH had a health issue that prevented him from coaching at the opening game of the SEC and it got me to thinking just a bit. What happens if DVH retired for say health reasons. Now before you come unglued and scream at me, I’m not saying he is doing that and I hope he is here for 20 more years. I love DVH and his approach to baseball. Just thinking about those wild “what ifs”.

Who would you like to replace him as coach at Arkansas? Would you consider Tony V (currently at Tennessee)? Or has his antics there soured you on him? I know when he was here he helped build some great teams and its hard to argue with what he is doing at Tenn. I know there are coaches that we develop a dislike for, but when they become your coach those dislike are just considered quirks and you love him. Sorta like Calamari for Kentucky. I’d say a large part of the people just downright hate him, but I bet all the wildcat fans love him.

So just curious who would you like to see replace DVH when he decides to leave. Or does that coach even exist out there yet (because I hope DVH is here a long time).

I think the question is not who the fans want to replace Dave, but who Dave wants to replace him. I believe he will have the option to recommend his successor, just as Norm did.

Who will that be? The answer might be different now than it will be in five or 10 years.

I hope DVH stays a long time. But if he leaves I’m all about Tony V. He’s a winner and with the facilities and fan base would produce on the hill. He is full of fire and is a great recruiter. From what I’ve heard he’s a good guy.

Yes Matt, thats most likely the case but that still does not invalidate the topic of “Right NOW” if it was your choice, who would you like to see slip into the Captains chair for baseball.

Me too, I’d like to see Tony V. I really liked him when he was here and hated to see him go. I think he is doing a monster job recruiting and running the Tenn program now as well. Can he sustain it? I don’t know, but the small sample size is almost enough for me to give him a shot here for the Hogs.

but who Dave wants to replace him

Man I hope that isn’t the case. How often does that work out? HY is paid a handsome salary to make these decisions. Getting DVH’s input is certainly warranted, but it should be HY’s decision only

I think it works out a lot. It worked from Norm to Dave.

I think it works out a lot. It worked from Norm to Dave.

If I’m not mistaken, countless Hog Pods with Bo Mattingly recounted that DVH was Frank’s first choice and asked Norm if he thought DVH would take it

I mean, ideally, HY’s choice would have the DVH stamp of approval, but it’s ultimately got to be HY’s choice

Norm set the seeds for Dave to be hired at Arkansas by introducing him to Frank Broyles during a summer camp a few years before he retired. I’ve written about it. 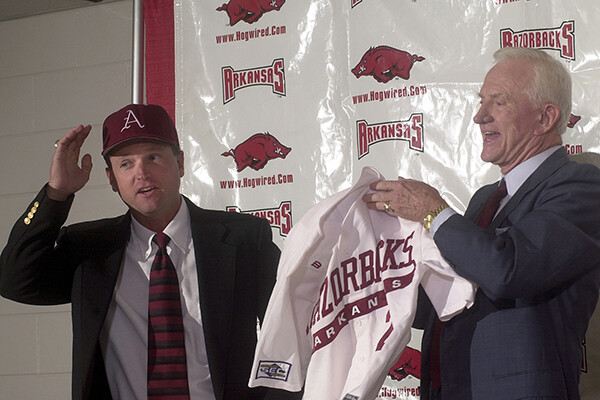 When I was hired: Dave Van Horn left a good job to come home

The week before Dave Van Horn took over for Norm DeBriyn as Arkansas’ baseball coach, the men nearly were in opposing dugouts at the College World Series.

It was a perfect situation.

But we’ve seen what happens when the AD isn’t allowed to take their pick for a job. John White comes to mind.

It should be HY’s choice and his choice only. It would insane for HY not to pick DVH’s brain on the decision, but to be beholden to his choice (or anyone else’s choice for that matter) is not a good way of doing business.

In a few years, I would hope that Bobby Wernes would be ready to be a head coach at Arkansas. He is not ready now, heck, he can’t even recruit because of the 2 assistant coach limit. He needs to follow the DVH path and work his way up.

I would be surprised if Bobby does not get a full-time assistant job somewhere after this season if he wants it. I would assume he wants to coach at the college level, but don’t know that for sure.