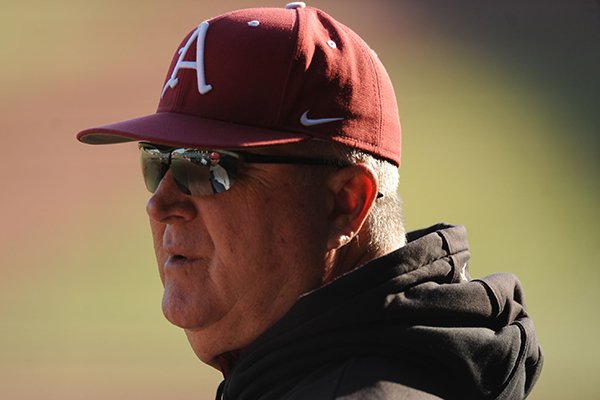 FAYETTEVILLE – Fresh off of a most interesting chapter, Dave Jorn is ready to find out what’s next in a baseball life that has been remarkable.

Jorn was a successful pitching coach for the Arkansas baseball team for 20 seasons, the last 14 under Dave Van Horn. He helped the Razorbacks to six College World Series trips. He “retired” from college baseball after the 2016 season, but pointed out at the time that he’d still look for opportunities to work in other areas of baseball.

Jorn thought there might a scouting opportunity in pro baseball when he left the Razorbacks. That didn’t materialize, but he did get a call that piqued his interest.

“I’d known Trey for a long time,” Jorn said. “Out of the blue, he called me last October and asked me to come to Korea with him.”

The phone call started in a unique way that made Jorn, a devout Christian, want to listen.

“Really, I thought I’d find something when I retired in June, but no one had called,” Jorn said. “When Trey called, he said, ‘The Lord has put you on my heart.’ I wanted to listen then.”

“I got to know Trey then,” Jorn said. “He had been the bench coach for the Astros before SK hired him last year. Trey and I had worked together in the Yankees’ system in 1989.”

Jorn probably could have worked another season with SK, but decided it “just took too much time.” It was a full-time job, similar to what he’d left with the Hogs after the 2016 season. Wife Melinda retired after a 30-year teaching career.

“I left home for spring training Jan. 30, and didn’t come back until October,” he said. “That’s not what I really wanted to do.

“I want to do something. I think I still have something to give. I have a lot of knowledge. You can only play so much golf, fish so much, but what I was doing in Korea took all of my time. Melinda came for a couple of months, but mostly it was a lot of FaceTime visits. I can’t keep doing that.

It was a rich experience. Jorn was assigned an interpreter. Few of his pitchers knew English. Jorn has learned a few Korean phrases, but it didn’t help in coaching the mechanics of the game.

“You always wondered if the translation was getting across exactly right,” he said. “I think my (interpreter) was good, but you weren’t always sure how it went.

“Without question there was a language barrier. A couple of my pitchers had played in our minor leagues here, so they knew a little English. But not much. I will say that they tried and I tried, it was jut hard. My bullpen coach did speak English.”

Spring training began in Vero Beach, Fla., at the old Dodgers facility. There were three weeks there, then another 18 days at a training facility in Okinawa, Japan.

The Wyverns, whose mascot is based on a mythical dragon, began the regular season on March 31. The routine is six games a week, with Monday always an off day. Rainouts are postponed until the last two weeks of September.

The Wyverns played in Incheon, half an hour southwest of Seoul. Travel to all games came via a luxury bus.

“There might have been a trip of two that were as long as four hours, but a lot of them were short,” Jorn said. “We’d load up three buses.”

“Lot of guys hit 45 home runs,” Jorn said. “It was full of big guys who could slug, but not a lot of power pitching.”

“Our pitching didn’t have to be deep with starters because we always had that off day and no doubleheaders,” Jorn said. “I will say that our bullpen wasn’t very good.”

There were quality pitchers, but just not power arms.

There were times at Arkansas where Jorn had more power arms than he had in Korea.

“For sure, that 2012 bunch with Ryne Stanek, Barrett Astin and those guys, yeah, they would have made our staff there,” he said. “But you are talking about guys who can pitch in the major leagues here.”

Jorn is proud of how he negotiated the travel in Korea.

“I had an apartment in a tower,” he said. “That’s the way it is there, apartment sky scrapers. I lived on the 32nd floor of a 46-story high rise. That’s all you see is buildings going up, with more cranes than I’ve ever seen in my life.

“They gave me a car. I drove. It looks like any American city, except for the signage. I couldn’t read a bit of it. I just used an app (Waze) to get around."

It reminded him of recruiting trips.

“I used Google maps here,” he said. “I’ll use Waze now. It’s a great GPS system with warnings for traffic issues. It was great in Korea.”

The Wyverns finished fifth in the 10-team KOB.

But it was three weeks of waiting as most of the clubs had more rainouts than the Wyverns.

“We had five rainouts to make up and other teams had as many as 10 or 12,” he said. “We got ours done and then had to wait to see if we made the playoffs.”

The system rewarded the higher seed with a victory to start the three-game set.

“So we were the low seed and started one game down,” he said. “We lost the first game so it was over.”

The league was full of hitter’s parks.

“It was 300 feet down the line in almost every park,” he said. “It was maybe 365 to the power alley. I guess that’s legit, but there were a lot of home runs. Our team set the new Korean record for homers and our third basemen hit 46.”

As far as his coaching, Jorn didn’t try to change mechanics too much. That’s not his style anyway.

“I never try to over haul guys,” he said. “It’s just not my way of doing things.”

It was never clear if anyone wanted that anyway.

“You just try to build trust,” he said. “The players would always tell me they wanted to change, but as much as they said they did, I think they were reluctant. I understood that.

“Just working through a translator makes it tough. The dynamics of a three-way conversation don’t lend to making a lot of changes.

“I just tried to incorporate simple things. You want them to stay over the rubber, get extension. If you can get those things right, you can help them.

“The Korean style of pitching is lots of fork balls, downward breakers. That was the big pitch. They don’t want to pitch off the fast ball.”

Overall, it was an enjoyable time.

“I enjoyed the people,” he said. “The culture is respect for the elders. My players bowed to me. They never would go into a room first.

“The people are humble, fun loving. There was no stiffness. I am glad I did it.

“I said all along I was not retiring from baseball, just retiring from the long season that is college baseball – playing in the fall and the spring and recruiting the entire time in between. It’s a grind.”

There are still hopes of working.

“Melinda retired and we downsized our house,” he said. “We had a two-story house that required going up and down stairs a lot. So we found something smaller in Bentonville.

“I don’t know what I’m going to do. We just finished moving in. We’d had our stuff in three full storage units. I’m going to duck hunt this week.

“Something will come up, I just don’t know what it might be. I think I’ll give (pitching) lessons. I want to do something else in baseball, just not commit to a big block of time. I still have knowledge to give. I still have a desire to work. I just want to have a little time for Melinda and myself.

“I haven’t pursued anything hard. The last few weeks have been about getting moved. That’s about done.

“I made a proposal to some pro teams to scout SEC baseball. I’d give them reports on Arkansas and on the five teams that come in here.”

There’s a desire to watch the Razorbacks this spring in what could be a great season.

“A lot of that staff is made up of my guys,” he said. “I told (UA pitching coach) Wes Johnson that there was a good nucleus of young guys. I remember talking with him that last weekend of 2016 when we played at Mississippi State, that we were throwing some good freshmen. Those are my guys: Blaine Knight, Isaiah Campbell, Keaton McKinney, Barrett Loeske, Kevin Kopps and several others.

“So I want to get out to see them pitch. That’s a great group of guys. They took their lumps that last season. We had to send them out there and that probably helped them.

“I think that group is ready to win now. It should be a fun season. I expect to be around to watch them. I guess that could change. Who knows what I’m going to be doing for sure. I don’t think I’m done yet.”