Fitt, Rooney, and Rogers break down the teams make their picks for bracket winners and eventual champion.

And their entire staff: 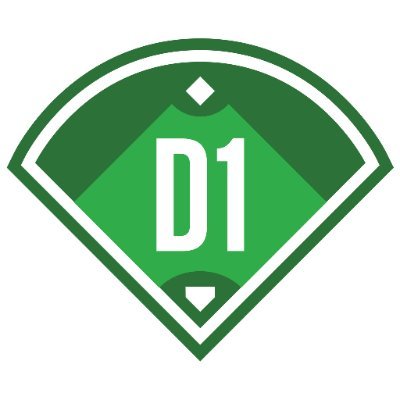 @d1baseball
𝐃𝟏𝐁𝐚𝐬𝐞𝐛𝐚𝐥𝐥 𝐒𝐭𝐚𝐟𝐟 𝐏𝐢𝐜𝐤𝐬 This might be the most wide open #MCWS field ever 🤔 Who are you taking to win it all? 👇 https://t.co/1Rpgyar0tX 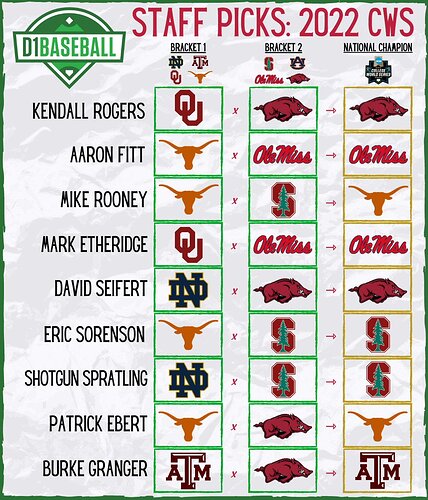 The other seven were picked at least to win their bracket. But not Auburn.

Cumon guys Stanford scares me! Haven’t they won I think 22 of their last 24 games? Aren’t they the highest seeded team left?

I have a healthy respect for Stanford. They definitely concern me.

North Carolina had won 19 of their last 22 games before we played them last weekend. And they had lost only 7 games at home all year.

We can’t expect anything to be easy in Omaha. Every team left earned their way there. Let’s take them one game at a time and hope for the best.

On paper we don’t match up with them at all they hit 37 points better than we do, 17 more home runs, have a slightly lower ERA but the game’s not played on paper if Noland can shut them down like he did North Carolina we have a shot. The first inning is huge, he sometimes starts off slow can’t do that against these guys they’ll jump on us with both feet if we not careful. They are a great offensive team in all seriousness and it’s going to be a great challenge to control them for 9 innings

Well the hogs will be the visitor so they really need to score first. Noland can keep Stanford off the scoreboard just don’t give up any walks!

The key is throwing breaking balls for strikes. It is now the key in all of baseball. Everyone can hit a fast ball.

Clay your right. The pitcher that hangs a few won’t last long. Mixing up pitches and be able to get the off speed ( curve, slider and change called a strike will be important. Old Number 1 can get sent on a trip out of the park pretty quick.

I don’t care who is the last team we play, as long as they are from the other the bracket.

Stanford also had five elimination games in the regional and the super. They won them, yeah, but they’re not invincible; they had to lose to get into those elimination games. I think we can slap Alex Williams around, and running his mouth yesterday just adds a little fuel to the fire.

I missed it.
What did he say?

Asked what he thought of the University of Arkansas lineup he’ll face in Saturday’s 1 p.m. College World Series contest, Williams said, “I know they’re going to be a good team, a good offense. I look forward to facing them. I think it’s going to be a good game.

“I’d take our offense over theirs any day. I think we’ve got them.

Bulletin board stuff for sure.

Matt noted that David Esquer immediately kinda walked it back.

The toothpaste is already out of the tube.

I saw the video of that newser last night on SEC Now and my jaw kinda dropped; did Williams really say that?

Oh, to be young, dumb, and full of…well, you know, again lol.

yeah especially after he has had his brains beat out the last 3 starts,you don’t do that kind of stuff when you are about to face them in a couple days,I’m sure our guys will be xtra jacked to send him a lesson and I hope we do!!

So from the graphic above, the consensus (4 out of 9 on each side) is that we will face Texas in the Finals.

He also laughed after he said it (and probably realized that it was a mistake).

I’m sure our players have made note of it, though.