Surprised
Thought Stanford would jump to 2

They’re banking on us eventually come out of this hitting funk.
I can see us doing that at home with some decent weather and the wind not blowing in I think you will see our number start to come up quite nicely. That was a big ball park in Texas and even though we didn’t hit the ball that well a couple of them to RF probably would have been gone at Baum. We’re having trouble with the strike zone right now once we figure out what to swing at and what not to swing at I think we’ll be fine.

I hope you’re right, Billy. Even after our comeback last night–about which I am certainly relieved–I admit I’m a little worried about this team. Coming off last year I had my sights set really high. Sort of expected we’d just resume our domination. Instead, we’re a weak 4-2 with no dominating wins and with one loss where we were pretty well dominated.

It just doesn’t seem like the team is playing well. Listened to DVH’s post game comments this morning. He’s concerned about our poor hitting, too. Fortunately, he’s the one guy I trust to right the ship if it can be righted.

Arkansas is ranked sixth this week in the coaches poll. 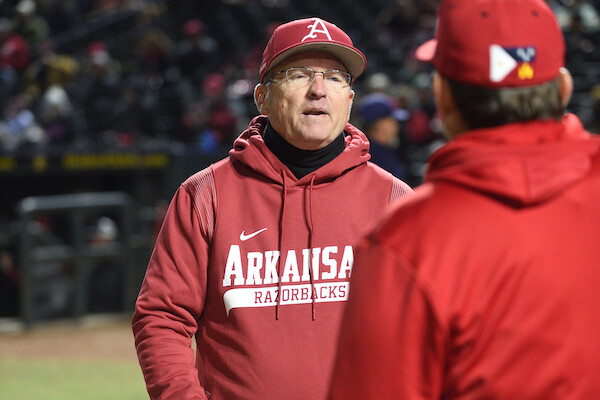 Surprised
Thought Stanford would jump to 2

They should have put Stanford ahead of us, at least for now.

I hope you’re right, Billy. Even after our comeback last night–about which I am certainly relieved–I admit I’m a little worried about this team.

I am a professional worrier. I share your feelings. That said, I sure would have traded a couple of those early season wins last year for one more win against NC State!

I hate the struggles the basketball team had in late December early January, but I honestly have doubts we would be as good as we are without that strugle.

No kidding. One more win against NCS might have led to a CWS championship. Yeah, early games in baseball are almost meaningless except to whatever extent they might eventually hurt your seeding in the tournament. And you’re right about basketball.

However, since I can’t see what we’re gonna look like in May or June, I’m gonna worry like hell when we look like crap in February.

This team should look completely different after ice hockey season.

In DVH I trust.

Not without some trepidation, but I do trust he knows best.

I don’t ever worry. Does no good. I have never understood that about watching sports. I enjoy all of it. Worrying is bad for your health. It seriously is. I much prefer to think it’s all interesting, even the struggles.

I do radio with someone – and he really tests me at times – who asks me “if fans should be worried” about something. I continue to tell him, “No, don’t worry about things that you can’t control.” That goes specifically for fans. I do not want to ever tell someone to worry about something. You will be much better off if you take that out of your vocabulary and eliminate it from discussion.

Thanks for the reminder.

No there’s no doubt about it we’re not hitting the ball well right now for sure but hitting is contagious good and bad.I would like to see us have a good game when we hit 3 or 4 home runs and score 10 or 12 runs and then see if that can’t get everybody’s spirits back in a good frame of mind so they can just play loose and easy and let their talent come out. Right now everybody’s seeing bad swings up at the plate and it kind of gives you a negative feeling but you start seeing people crush the ball it’s just the opposite that’s what I’m waiting on

We knew going in that the wind was blowing in and runs would be tough to produce.

Yeah and a big ballpark cost Turner 2 home runs Friday and those two that were caught down the right field line close to the fence yesterday will probably home runs if we were playing at home. I agree with Dave we’re swinging it pitches out of the strike zone, just pressing and not seeing the ball well. I think it will just take a couple of good games to get us back in a groove

“No, don’t worry about things that you can’t control.” That goes specifically for fans. I do not want to ever tell someone to worry about something. You will be much better off if you take that out of your vocabulary and eliminate it from discussion.

From your mouth to my heart please, I KNOW what you say is true. And my wife says almost the same things to me. I am 58, almost 59, and worry all the time about things outside of my control. Is that stupid? YES. It makes no sense, is not Biblical, not scientific. But here I am.

It’s ok. But you can resolve to give SOME of them up. There are others who will and do worry for you. Let them do it.

I’m the same way, Greg. Ironically, I don’t worry much about the really important things over which I have no control, but sports is an area where I tend to indulge myself and give in to my instincts. When I say “sports” I mean “Razorbacks.” I tend to worry most when my expectations are high. I didn’t really worry about football back in August. I will this summer. I stopped worrying about basketball in early January–only to resume it by mid-February. I’m now worried about baseball. Wish I weren’t, but I am.

I much prefer to think it’s all interesting, even the struggles.

The Hog’s batting average is #246 in the nation; with plenty of cushion, quite last in the SEC.

They have played six games batting into the wind. Tough conditions for hitters. Great for pitching.