D1 has us indeed going to Stillwater 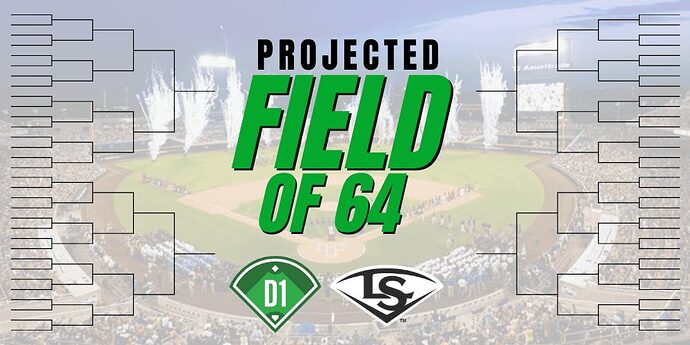 Our field of 64 projection has one change in the top eight national seeds, two new hosts, and lots of action on the bubble.

We are # 2 against Dallas Baptist SE MO is #4 seed

Well I figure we could advance or get beat. It just depends on which Hogs team shows up and if they are ready to play ball!

Yeah these are just projections we’ll find out tomorrow at 11:00 where we really are

Well it almost 11 now. Yea m going to see where the hogs are headed.

Halfway through the bracket

Seems certain to be Stillwater now

Playing Grand canyon… and we saw what Missouri State can do they can crush it.

Grand canyon has a team batting average of 309. So obviously can swing it

Ole Miss was the last team in. NC State was the first team out.

I always take these teams BA’s with a grain of salt. Don’t know how strong the pitching was they faced. 309 Team BA is certainly better than ours though.

They are very good team. They have beaten Arizona twice. Texas tech twice,Oregon State and Stanford. But come in on a two-game losing streak getting beats soundly by Abilene Christian and their last game so they’re a little bit of a up and down like we are.

Right. But I just added they come into it with it two game losing streak getting be pretty sounded by Abilene Christian in their last game. Still I don’t remember playing a team in the first round who’s beating the quality of teams they have

Yep. They hit 68 homers (we have 86) so not a huge homer team, but they can hit it out occasionally.

3500 permanent seats
Expandable to 8000
Their biggest attendance 6362 for the dedication of the stadium last year.