D1 Baseball Higher on Hogs than others

We’re preseason number 8 in the D1 Baseball poll, way higher than the other polls so far. Matt where would you peg the Hogs? You’ve seen them more in the fall than most people.

Here is the D1 ranking. BTW, Arkansas comes in 5th in the SEC. 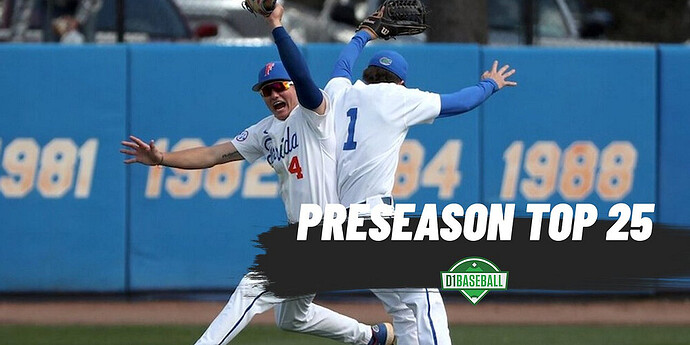 Matt where would you peg the Hogs? You’ve seen them more in the fall than most people.

I didn’t get to see them much last fall because the practices were closed down. I basically saw what everyone else did during the Cardinal-White series in October. They look like a good team, but they play a tough schedule and they play in a great conference. I think Florida, Vanderbilt, LSU, Mississippi State and Ole Miss all look like great teams.

I tend to think the league is going to be a little higher scoring this year because so many great pitchers went in the 2020 draft, but a lot of good hitters are back due to the shortening of the draft.

If I were ranking Arkansas, it’d probably be somewhere between 10-20. There are at least five comparable — if not better — teams in the SEC. Texas Tech, UCLA and Louisville are also supposed to be really good, and I’m sure there are some other strong teams from the other conferences that I don’t follow as closely.

There is a lot of experience and potential at Arkansas, but the roster is somewhat lacking in past production. I think Franklin and Moore showed last season that they can be very good and a lineup can be built around them, but some of the others who are going to start struggled last year.

How consistent are Braydon Webb and Zack Gregory going to be? I think they might be the opening-day corner outfielders. How quickly does Jalen Battles acclimate to Division I? He’ll be the shortstop. Are Casey Opitz, Matt Goodheart and Jacob Nesbit better hitters than they were a year ago?

I think the bullpen has a chance to be strong because it is deep, but who will start? Can some starters go six, maybe seven innings consistently? Arkansas was spoiled with the incredible consistency Blaine Knight and Isaiah Campbell showed as Game 1 starters in 2018 and 2019. Based on the first four weeks it didn’t appear the Razorbacks were going to replace their consistency in the No. 1 spot last year. Can Noland be that guy this year? Wicklander? Someone else? I thought Caleb Bolden was pitching well last year and was about to take a weekend spot.

Zebulon Vermillion looked to be becoming a pretty reliable closer when last season stopped, but he might start this year. I think he, Ryan Costeiu and Peyton Pallette are closer options this year. Costeiu was really intriguing during the fall. His pitches seem to have a lot of movement.

It is going to be fascinating to watch how the pitching pans out the first few weeks. I think there will be a lot of experimenting to see who pitches well and where. Where do Caden Monke and Lael Lockhart fit? I think both could start, but both could be good middle or long relief pitchers.

One area where I think this team will be strong is defensively. Opitz, Moore and Franklin are strong defensive players, and Battles comes with good credentials at shortstop. Nesbit has been a pretty good third baseman and I’ve seen Webb make a lot of nice plays in left field. The two big question marks, in my mind, are first base and right field.

I know very little about the rest of the SEC other than what the polls show. What none of us know is how quickly some of the highly regarded freshmen – and there are a bunch who made it to school that normally would go in the draft – will settle into lineups.

I suspect that both right field and first base will be positions that platoon with right-left combinations early in the season until someone takes firm possession of those spots. There are a lot of options. Someone to watch out for would be Cullen Smith, the East Tennessee State transfer. He sat out last year after transferring. He led the team in hitting in the fall. He’s a lefty bat and that is always a nice asset. Another lefty swinging hitter who might figure into the lineup is Zack Gregory. Brady Slavens is a third lefty bat with more power than the others.

Of course, that gives coach Dave Van Horn some flexibility against right-hand pitchers. You also have two switch hitting regulars in Robert Moore and Casy Opitz.

Among the new pitchers are good transfers, lefty Lael Lockheart, a Friday night starter the last two years at Houston. He only throws 89-92 (not heat) but locates and has four pitches. Another transfer is Ryan Costeiu, someone Van Horn told me has “filthy stuff.” He does throw heat.

Pitching coach Matt Hobbs is fascinated with this staff. Lots of big-time arms. Velocity is off the charts in many places. Peyton Pallette touched 98 in the fall. He was consistent at 97 last summer and again in the fall. He had some outings in the fall (scrimmages and bullpen) where he was never below 95. It’s not clear where Pallette will pitch, but Hobbs said what he’s done in the fall and already in January “has leveraged his options.”

Patrick Wicklander has been good in his early bullpens this January. He has added velocity and command of more pitches. I think he’s ready to be the force most thought he was as a true freshman.

Hobbs thinks Kevin Kopps has returned to form with a cutter that is both a strike and has depth to its break. Hobbs thinks people will be writing stories about his successes in three months. This is the sixth year for Kopps. The crazy thing, Kopps is still listed as a redshirt junior.

The trick is to see all these arms in early action. Playing the three really good Big 12 teams in Arlington to start the season makes it tough to get everyone early work. But Hobbs told me he wants to get as many looks before SEC play as possible. He used 16 pitchers in the first 16 games last year when Covid-19 haulted the season the week SEC play was to begin. He wants to do something similar this year in nonconference play and let players prove what they role as best. He told me he doesn’t pick their roles, they do it by the way they pitch.

This team has lots of options both on the mound and with position players. Nate Thompson thinks this team has power despite losing Heston Kjerstad and Casey Martin. There is more depth in the position players. That is important with the possibility of Covid-19 quarantines. You just won’t know what you have for an SEC series until late in the week.

I’ve just finished work on the Hawgs Illustrated Baseball Preview. It prints tonight. I spent an hour each with Van Horn, Hobbs and Thompson. They are excited with this roster, but more than anything just happy they are about to play games. It was tough to abandon last year’s schedule with a team that was rounding into form.