Crutchfield leaving Arkansas after one season

He will be the new head coach at East Central in Oklahoma. More here: 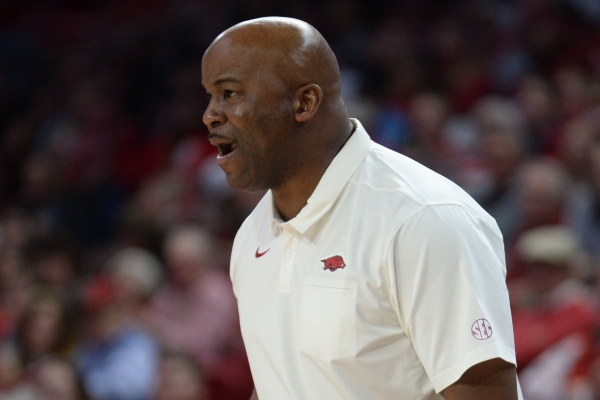 Chris Crutchfield is leaving the Arkansas men’s basketball program after one season.

Well this is a new feeling… Assistant Coaches leaving for other jobs.

This seems a touch odd. Seem he would have always had ops like this previously.

What stood out to me was the coaches’ comment regarding “work-life balance.”

I don’t know if this will happen, but I could see Anthony Ruta being promoted to an assistant coach from director of basketball operations. Ruta was an on-court assistant at Nevada.

This is why I asked why were only two coaches doing the overwhelming majority of the virtual tours. That was odd to me.

I remember that. Your question was never answered.

Just for the record though, there was one virtual tour recently when all coaches were present.

I guess after 12 previous seasons coaching in Okla, Maybe that’s where he feels home is.

I am hoping Muss & Johnny Jones reunite at Arkansas. (former SEC Coach and a Monster Recruiter)

I’m happy for crutch, to have a hc job.

also, there have been the whispers of how hard Muss is to work for, hope this is not a trend…

Nevada fans warned us that Musselman could be difficult, but we were in the honeymoon phase and didn’t want to hear it.

But as long as he wins, everything is golden🤷🏾‍♂️

If and when a head coach is said to not push his coaches to work hard, it’s time to look for a new head coach. Seriously, I have not heard he is anything but fair to coaches and to their families. He’s a tireless worker. He is not asking anyone to do anything he doesn’t do.

I believe the recruiting reach and travel for a DII head coach at East Central will be less demanding. He’ll recruit, but it’s probably going to be in a car. He will probably ask his assistant coach to be the road man. That’s how it works.

Nevada fans warned us that Musselman could be difficult,

When? Seriously, I never heard anything of the sort. Or are you just stirring?

I can assure you no one has heard whispers of anything of the sort. Some folks just love to try to start something. Coach Muss is well respected from everything I’ve ever read!

Musselman could be difficult,

Please give me “difficult”. Though I would probably substitute the words “driven to succeed” for the word “difficult”.

I don’t know that any D-I coach would be considered easy. Stan recruited pretty well (Al Jefferson comes to mind); he just couldn’t coach them once they got here, and of course Jefferson never got on campus. Pelphrey had his moments too. There’s a difference between working hard and working effectively. Stan got to the Dance his last two years and still got bounced. Both Stan and Pel were about 10 games over .500 for their tenure here, which would be fine at a lot of schools. But here it got them fired. I don’t doubt that they and their staffs were busting tail to get it done, but they didn’t.

I can assure you that I’m not trying to start anything at all. I also promise that if I told you my source, you’d at least raise an eyebrow.

Why on earth would I want to “start something”? I desperately want to return to the glory years of Eddie and Nolan, and I think we just may have the right coach to do that. Very exciting times. Heck, last season was fun and far exceeded my expectations, especially prior to IJoe’s injury.

And I totally agree with the other posts here, that most successful coaches are hard men to work under, but most humans need a motivator. I’m not complaining at all.

I’m simply passing along info, you can take it or leave it.

I don’t doubt that they “and their staffs” were busting tail to get it done, but they didn’t.

In comparison to Nolan, Saban, and Muss, no they weren’t. And, I made no mention about “and staff”. Only discussion regarding “difficult” was about a head coach.

I have always stood up for Stan when it comes to recruiting. Unfortunately, that’s only one part of a head coach’s job.