Once again Toney comes through with a great, great defensive performance against Gonzaga. His assignment was to smother Nembhard the Zags point guard. Nembhart is the guy who gets the Zags offense going in high gear. Au’Diese Toney more than smothered the outstanding PG. It was a big key to the Hogs victory. Great D from somewhat of an unsung hero.

Tony and Trey just have come up big. The balance on this team is off the charts…

Toney executed what Muss and staff created to neutralize Nembhard-pick him up early and keep him from getting a lot of momentum to the basket. Toney also played brilliantly around the basket late in the game.

I expected them to put Toney on Nembhard, and he executed it better than I had hoped. Also expected Wade on Holmgren, but the main thing we did with Holmgren is get him in foul trouble. Wondering who we put Toney on for Dook?

While true, the Zags just played out of sync. So much so, that “three minute Gonzaga point barrage” they’re famous for never materialized in the second half - as Barkley commented.

Hand it to Muss - just a great game plan - and wonderful execution by the whole team. PS: Many claps for Devo, too. He quietly, while playing the Nation’s #1 team, led our “winning” team in ± points, with 10.

I expect Toney to get Ranchero Sat night and I think he will contain him.We just need our Scorers to show up and shoot the ball the way they are capable.we are due a good shooting game 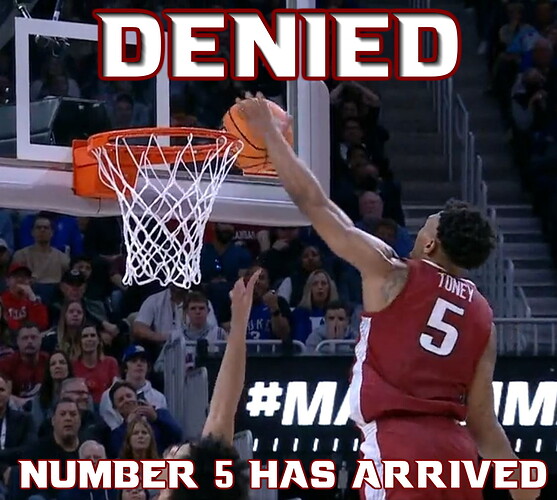