The Arkansas basketball Twitter account put this out earlier. I’m going to need some time on this. 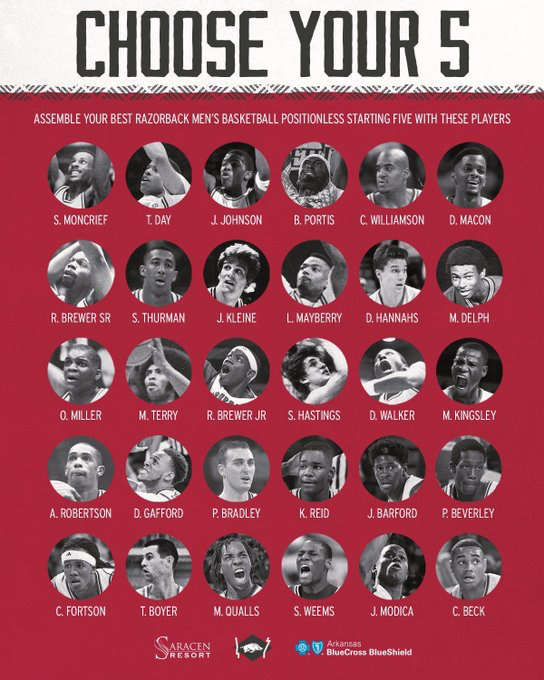 They left Mason off?

Apparently. No offense to Dusty Hannahs, but Mason should be on there over him, in my opinion.

I agree. SEC CPOY deserves to be on the list anyway.

C – Gafford. Scoring plus rim protection.
PF – Corliss. Duh.
SF-- Day
SG – Moncrief. IMO he was really a small forward here without enough outside shot to be a SG, but you have to put him somewhere.
PG – Mason, scoring and distributing.

Sent my dad this graphic. He went with:

I think my group would be:

Sent my dad this graphic. He went with:

I think my group would be:

Both defensible. Marvin was a small forward basically and jumped center even with a 7-footer in the lineup. I don’t know how you could leave Corliss out though. Beck was tough as nails but didn’t score enough; 7.9 career average.

As a point guard growing up, I liked watching Beck. I’ll take his five assists and two steals per game, let him get the guards going and feed the bigs. Just a personal preference taking Gafford and Big O. I love how Gafford runs the floor, and Big O was a terrific outlet passer. I want my team to run and he can get us going in transition.

PG-Lee Mayberry, could do it all.
SG-Todd Day, could make the 3, plus drive and create his own shot.
SF-Joe Johnson, same as Day
PF-Corliss Williamson, strong, good offense and defense, and rebounding.
C-Bobby Portis-versatile and could create a lot of mismatches for his teammates.

It’s tough to leave some out, especially my man Joe Johnson, but I will go with 5 who accomplished most as a Razorback

Murry is too good for this lineup.

Murry is too good for this lineup.

I can’t believe Joe Kleine hasn’t been mentioned. He even played on an Olympic team.

Corliss and Moncrief are the only crossovers depending on the coach. They were hands down for me our 2 best all time players. They play and start for any coach.

He even played on an Olympic team.

So did Alvin Robertson, who also has one of four quadruple doubles in NBA history, and the first that didn’t go to overtime.