Crean on the way out at Georgia

He’s been dead coach walking for a while. They already have a target list of replacements. 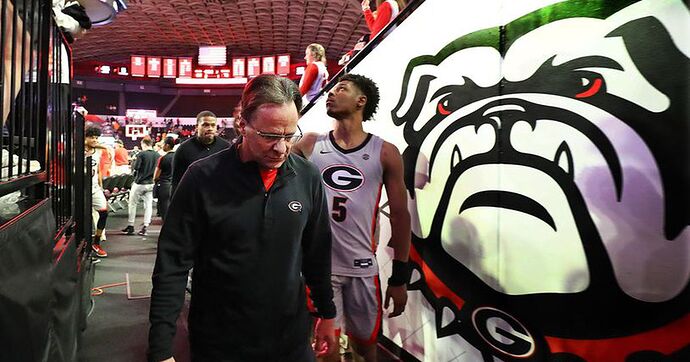 After overseeing the losingest season in the history of Georgia basketball, all indications are that Tom Crean and the Bulldogs will part ways after the season concludes, according to multiple people with knowledge of the situation. However, an...

Georgia really got stuck with the buyout amounts. Firing him last year, when they should have let him go, would have cost over $7M. After this year’s debacle, they still owe him $3.2M. That’s some heavy dough for a guy who got fired at his last gig.

Georgia’s far from a poor program, but that’s a lot of money lost on what was supposed to be a splash hire.

but that’s a lot of money lost on what was supposed to be a splash hire.

Everyone else seems to recruit Georgia pretty well.

We all knew this was coming, but I thought they’d wait until his last game in the SECT was finished before they announced it. Is Cuonzo next?

Howland at MSU and Kermit Davis at Ole Miss have warm seats as well. I’m not sure Howland has a viable excuse this far along in his stint at Starkville. Davis has some excuses for this year, but may have trouble explaining how things are about to get a lot better.

Frank Martin appears to have re-gained his footing at South Carolina, as his guys finished up strong.

Looking forward, all of those guys that don’t get fired need to have a good year next year. Mike White and Buzz Williams also may be under a bit of pressure to get back to the dance next season.

Howland has been so good at cheating but just can’t get the wins out of his paid guns.

Yep, lots of talent brought in, but less to show for it than the prior Head Procurer. There’s a lot of reasons to think that State is at best treading water in the middle of the pack as long as he stays.

You can’t recruit when your arena is almost 60 years old. No matter who the next coach is they need to build a new arena. Recruits comparing Georgia, to TN, KY, FL, AR where do you think they will be going? They have to put there money where where there mouth is !

I’d be shocked if they got anyone on their list unless it includes John Pelphrey.