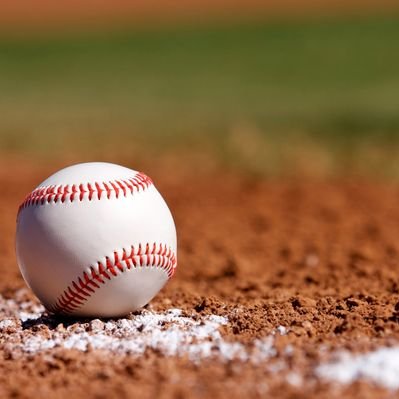 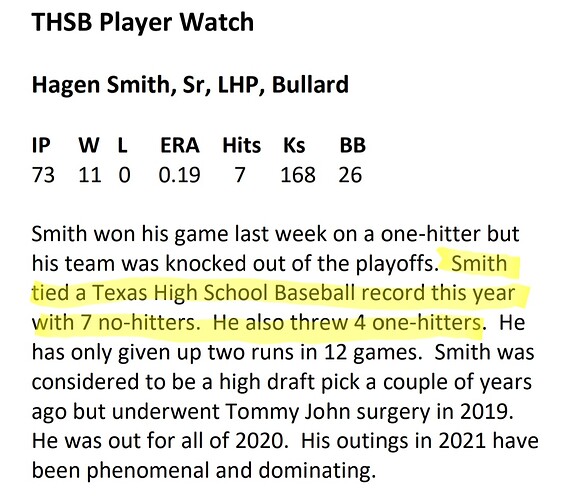 I suppose there’s little chance we ever see him on campus, but his stats are crazy. I’ve seen these stats before, but I haven’t seen anything about his stats before this year. I would be curious to see how he did as a junior.

For some perspective, Lael Lockhart said in his post-game interview last week after his near-perfect game that he had never thrown a no-hitter or anything like that before, even in high school.

I can answer that question. He didn’t play as a junior because of Tommy John surgery (you can’t redshirt in high school). I would suspect teams might be a little leery of a kid who’s already blown out his arm once, but maybe not,

Dang, fantastic year and come back after that kind of surgery. Does anyone know the level or classification of the league they play in? Those stats are mind blowing

Bullard is a little town about 15 miles south of Tyler in East Texas. According to Maxpreps they play at the 4A level. They were knocked out of the playoffs by Liberty-Eylau which is just outside Texarkana.

.I would love to have him and our success just may allow it too happen but he’s going to draw a lot of attention…just have to see what happens.

ESPN’s Kiley McDaniel published an update on some draft prospects a couple of weeks ago.

He mentioned Hagen Smith in passing, stating: “Texas prep lefty Hagen Smith (Arkansas commit) has seven of them this spring, in just 11 total starts, but has already had Tommy John surgery.”

So he’s definitely on pro radars, but the TJ might scare them away.

McDaniel spoke more at length about SS Max Muncy. He has “twitch and raw power to his game. He has interest from some teams in the 20s but likely goes just outside of the first round.” Amazing to me that we got a guy that highly regarded from Thousand Oaks.

Here’s the link: MLB draft stock watch - Who is playing their way into the first round?

I’ll be very surprised if Muncy shows up, but some kids prefer to play in college. He’ll definitely be treated better here than in some team’s Rookie League or Low-A club (there was a tweet recently of a postgame meal given to Oakland A’s minor leaguers; it was a cheese sandwich and a little bit of coleslaw). In fact, here it is: 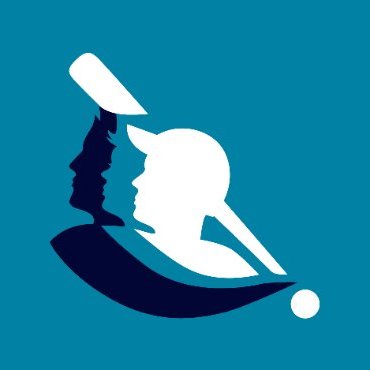 Players in the Oakland A’s organization shared these photos of their recent post-game meals. No employer would serve these meals to employees they care about. Why are the A’s serving them to their future Major Leaguers? https://t.co/cIFqiPg6iX 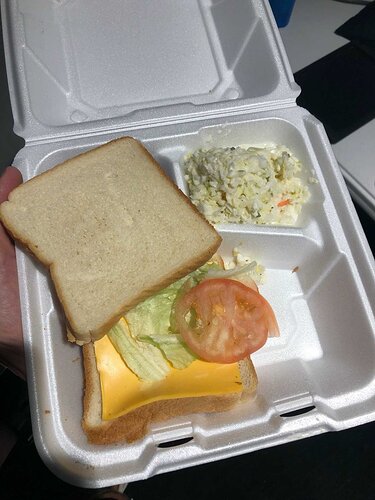 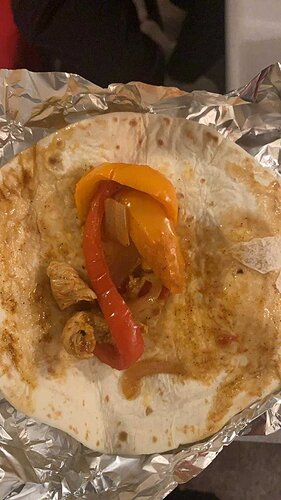 As for recruiting in California, we’ve gotten James McCann and Dominic Fletcher off the left coast in the past. They know that the SEC is the highest level of college baseball, almost every game is on TV so the folks back home can see them, and they have a really good chance to get to Omaha. And pro scouts will be at every game.