Council is going to be really fun to watch 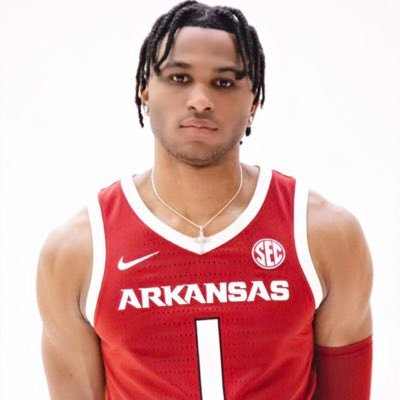 Note to @hogfanfish: I’m not sure how you were trying to link to this Tweet. The way to do it is to look for the symbol below the post that is an arrow pointing upwards from within an open box. Click on that and select Copy link to Tweet. Then paste that link into the post.

What a vertical. Ricky’s head gets above the rim on that dunk. That’s more than a 42" vertical. Some of that may be the camera angle, but my goodness, that boy can sky! He better not try a running dunk from the deep corner or he’ll put a major dent on top of his head from the backboard (or the rim).

I remember reading about an old ABA player who could allegedly get a dollar bill off the top of the backboard and give you change on the way down. Council might not be far from that.

I remember reading about an old ABA player

I had heard that about David Thompson.

Yep, Thompson, but before that about Darnell Hillman of the Pacers. Also heard it about playground legend Earl “the Goat” Manigault.

When a reporter asked Hillman about the stories, he told the reporter “Put a $100 bill up there and see.” The reporter, if he had any Benjamins in his pocket, kept them there.

This Razorback team might set a new record for # of dunks in a season. Serious athleticism up and down the roster. Wouldn’t surprise me to see this team break records for # of blocked shots in a season either.

Somebody on here always says just dunk it.
Is it Gas?

Yes, Gas - all of us will be in Hog heaven this season with the rim rattling

I don’t care how the ball goes through the rim, just so it goes through. They all count 2 or 3. Just be sure to get that 2 or 3

I remember one year the NCAA outlawed the dunk. I think it was because Lew Alcinder was tearing up the baskets dunking on everyone. The rule was removed the next year if I recall correctly.

There were few NBA games on TV in those days. I remember little of those days.
I recall when they inserted the 3 point line and liked it, but feel it should be moved back about five feet with todays athletes.

Yeah it was banned for 9 years, from 1967 to 1976. I remember in the 1973 NCAA final UCLA just lobbed it over the top to Bill Walton who would tip it in repeatedly; he couldn’t dunk it because of the no-dunk rule (and Tiger High coach Gene Bartow was clueless as to how to stop it; Walton shot 21 for 22 that night). Two years later Bartow would replace John Wooden as the UCLA coach.

One of Memphis’ starters that night was Bill Laurie, who would later marry into the Walton family and essentially pay for the Mizzou arena (it was originally named for his daughter until it was revealed that she partied her way through USCw and paid someone to do her schoolwork). Laurie also owned the Blues hockey team for a while. Laurie went scoreless but did have two assists.

Yep that rule was in place for quite a few years. Just happened to be during the time of Lew (Kareem) and early Walton years maybe. Why Lew developed the sky hook under Wooden and Walton a great shooter off the board. I think I was a soph or junior in HS when dunking was reinstated in 1974 or 75. Not that dunking mattered to me, I wasn’t doing any of it.

Kareem was and is convinced the no-dunk rule had racial overtones; if white guys had been doing the dunking, they would have left it alone. I’m not sure he’s wrong. Funny thing, though, one of the main people affected by the no-dunk rule was Calvin Murphy, who was dunking like crazy at the time at 5-10.

Serendipity: The rule also led to Kareem developing the skyhook, which may have been the most unstoppable move ever (if you blocked it, it was pretty much automatically a goaltend). Of course, part of what made it unstoppable was the NBA defensive rules; they couldn’t double-team or run any kind of zone at the time. Which is not to say that he always made the shot, but it was unblockable.