I’ve been a big fan of Coach Muss since we hired him, and I’m glad he’s here. But that doesn’t mean I’m not also a Mike Anderson fan…as a coach and especially as a person. This may be one of those actual “win/win” situations…I’m very happy to see Coach Anderson’s success. 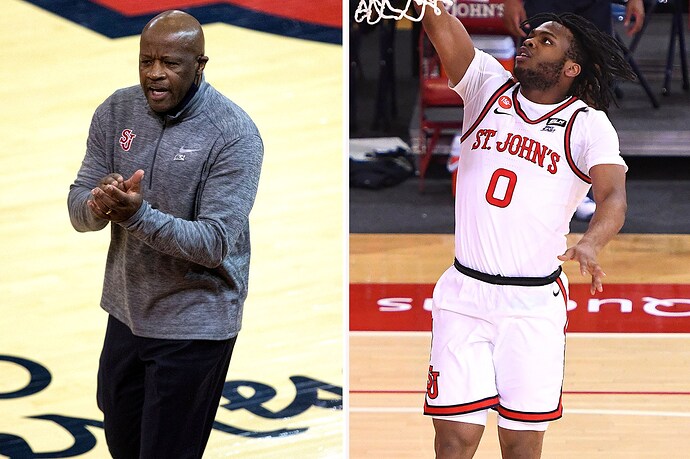 At the time of Mike Anderson’s hiring by St. John’s, there was some doubt he was the right fit. There was concern in some circles as to whether or not the veteran coach who had never he…

People in New York want to like St. John’s basketball, so as long as he keeps doing what he does best, he’s going to start getting a lot more support behind him in terms of fans.

Super happy for him and wish nothing but the best.

Couldn’t happen to a better man. Congrats, Coach A!

Great story. CMA can clean a mess up.
I hope he has success. Good coach but even a better man. He’s still a hog in my book! I’m also glad we have CEM coaching our hogs.

I’m happy for Mike… he certainly showed here he could clean up a mess. Looks like he is doing the same thing there. I’m also happy he is there and not here. Mike was great at cleaning up a mess, but he would also have us more often than not becoming “bubble watchers” in March instead of “seed debaters”. I grew very tired of that. We needed the change. I happy its working out so well for both institutions and Mike.

No matter where CMA goes or what he does, he was once part of the greatest days in Arkansas basketball history. He will always be a Hog in my book as well!
Congratulations, CMA!
You’ll always be a part of us!!

I will always root for Mike.

CMA is a Razorback through and through. He’s the kind of man that people should aspire to be. I’m glad he’s having some success and hope he knows fans here love him.

I think you are predicting St John’s is not going anywhere beyond cleaning the mess. That he would not be able to repeat what he did at Missouri and reach Elite Eight.

Mike did ok at Missouri. He did make that Elite 8, which is a huge accomplishment no doubt, but they never got past the opening weekend any other year. Quin Snyder made an Elite 8 there as well, that didn’t turn out to be a preview of future success. Mike also made the Sweet 16 once at UAB, but again never out of the first weekend other than that. So his overall body of work is making it out of the first weekend twice in 15+ years

PJ, I like Mike always have, but the numbers don’t lie. In conference play (Big 12, SEC, Big East) he is a 50-50 coach. Actually 52%. Thats means he barely wins half his conference games, so that will generally keep you in a situation where your always watching the bubble. Only in Conf. USA has he ever finished 1st. He did manage to finish 2nd one time at Arkansas and 3rd one time at Missouri, the rest of the time he averaged finishing 5-8. Again a bubble season (sometimes you get in sometimes you don’t).

I remember Nolan use to say he wanted to win all his home games and 50% of the road games in conference. Thats 75% and that keeps you in the NCAA. Now granted I know Nolan wanted to win them all, but just saying something he told me a long time ago.

Congrats Mike, keep it up.

Not challenging you. Just wanted to make sure that you are predicting that he will repeat what happened at arkansas and not Missouri. And it is an established fact that he was fired because he did not make it to second weekend of NCAAT and did not compete for the SEC championship every year. Nothing to argue there.

However, just a few corrections to your numbers. In addition to 2nd, Arkansas also finished 3rd, 4th and 5th in the SEC. and in conference play, he won 55% of the games. Muss so far is at 57%.

I don’t have numbers handy for home games, I thought he did well in home games if you take out a couple of years (counterfeit scandal year and his final year with all freshman team). I don’t remember driving home unhappy too many times.

He had a big road problem in his first three years. But in the remaining 5, Arkansas was the second best road team behind Kentucky.

That is the reason he was fired.

However, just a few corrections to your numbers. In addition to 2nd, Arkansas also finished 3rd, 4th and 5th in the SEC. and in conference play, he won 55% of the games. Muss so far is at 57%. 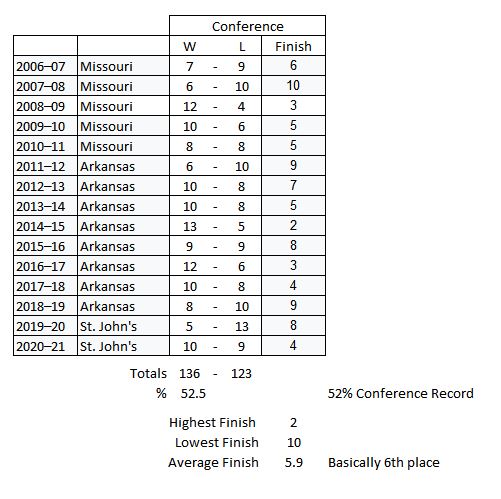 Mike was a good coach if you want to clean up a program and maybe get to the NCAA from time to time but not consistently. He was not elite, he was middle of the pack. I hate that, but it is what it is and I know lots of people like him… I do to… this is not an “I HATE MIKE” post. Just my honest unbiased assessment of what he has done in his P5 career as a head coach.

Will Muss be better, I don’t know at this point, it will take a few more years to see what he does. Right now I’m optimistic, but I always am with a fairly new coach. Only time will tell.

Its a win - win for Hogs and St Johns. I think fellow Hogs fans are comfortable enough with our current coach and 8th ranked team to also be able to congratulate our former coach CMA for his Big East coach of year award without throwing shade.

He hasnt won a national championship as he unfortunately meets a coach that has won or made final four. He has beaten Tubby’s #1 Kentucky, Buzz Williams Marquette for sweet 16 and Calipari Memphis for final 8. He has lost to Bill Self, Tubby Smith, Lute Olsen, Jim Calhoun, Roy Williams twice, Bob Huggy Bear Huggins whose teams were loaded with top 10 talent. The current coach at UCLA and Butler are only two without title or final four pedigree to beat him in ncaa.

I expect big let down Thursday as players stop playing over the heads because freshman phenom returning from injury. I hope to be pleasantly surprised. If not, my Hogs play Friday. Been a season ticket holder since 1982 and this is best season of my lifetime without Eddie or Nolan on bench.